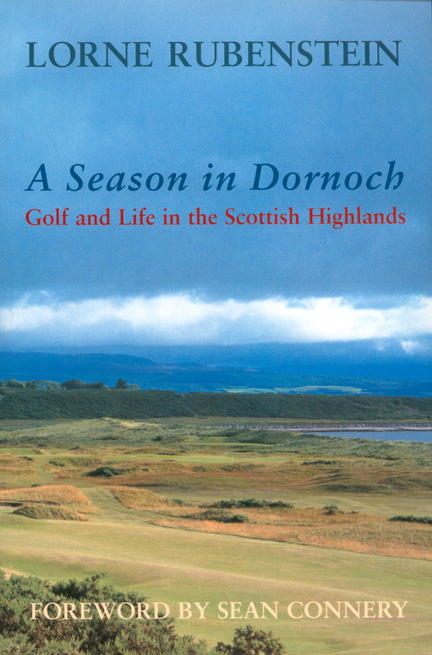 In 1977, Lorne Rubenstein, an avid young golfer, first travelled to Dornoch in the Scottish Highlands. The experience had a profound effect on him, and 23 years later, now a respected journalist and established golf writer, Lorne Rubenstein returned to Dornoch to spend an entire summer. With his wife, he rented a flat in the very centre of town, mere steps from the golf course, and enthusiastically set out to explore. A Season in Dornoch is the account of that summer.

Rubenstein writes about the melancholy history of the Highland Clearances, and the friendly, sometimes eccentric, people who love their town, their golf, and their single-malt whisky, and delight in sharing them with visitors that they recognize as kindred spirits. But most of all he writes about a summer lived around
golf, in a community where golf is king – and the golf course is part of the common lands where townspeople stroll of an evening.

The golf played here is links golf, and the course is shaped by weather as much as by man. The fairways curve amongst gorse and rough windblown grasses, and the bunkers are cut deep into the turf. Playing here, Rubenstein, like all links golfers, is less in control, and so, gradually, begins to relax, to return to golf as play, as opposed to a game of analysis and effort.

A Season in Dornoch is an affectionate portrait of a place and the people who live there, a fascinating look at links golf and the spirit and skills it calls forth, and a perceptive and ultimately moving memoir of one man’s quest to experience once again the pure love of sport that he knew in his youth.

Other titles by Lorne Rubenstein

This Round's On Me

A Disorderly Compendium of Golf

The Road to the Masters

Other titles by Sean Connery