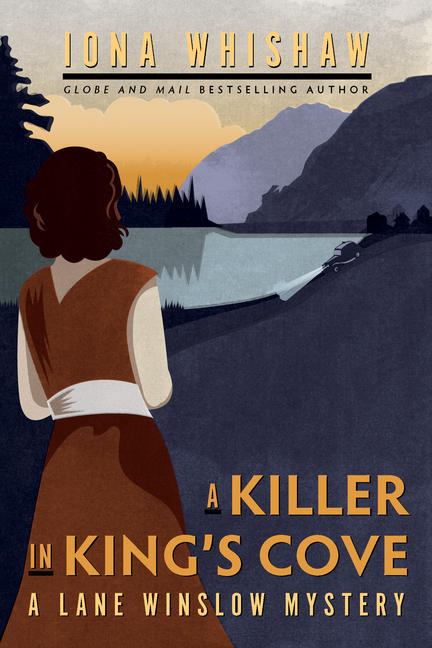 A smart and enchanting postwar mystery that will appeal to fans of the Maisie Dobbs series by Jacqueline Winspear.

It is 1946, and war-weary young ex-intelligence officer Lane Winslow leaves London to look for a fresh start. When she finds herself happily settled into a sleepy hamlet in the interior of British Columbia surrounded by a suitably eclectic cast of small-town characters she feels like she may finally be able to put her past to rest.

But then a body is discovered, the victim of murder, and although she works alongside the town’s inspectors Darling and Ames to discover who might have possibly have motivation to kill, she unknowingly casts doubt on herself. As the investigation reveals facts that she has desperately tried to keep a secret, it threatens to pull her into a vortex of even greater losses than the ones she has already endured.

A clever postwar mystery that will appeal to fans the Maisie Dobbs series by Jacqueline Winspear or the Bess Crawford series by Charles Todd.

Iona Whishaw was born in British Columbia. After living her early years in the Kootenays, she spent her formative years living and learning in Mexico, Nicaragua, and the US. She travelled extensively for pleasure and education before settling in the Vancouver area. Throughout her roles as youth worker, social worker, teacher, and award-winning high school principal, her love of writing remained consistent, and compelled her to obtain her master’s in creative writing from the University of British Columbia. Iona has published short fiction, poetry, poetry translation, and one children’s book, Henry and the Cow Problem. A Killer in King’s Cove was her first adult novel. Her heroine, Lane Winslow, was inspired by Iona’s mother who, like her father before her, was a wartime spy. Visit ionawhishaw.com to find out more.

"A Killer in King’s Cove is worth a look, especially as the author intends to reprise her lead character."

"A debut mystery by an author destined for awards: a setting ripe for story telling, a convincing gift for portraying the painful and riveting after-like for the survivors of two world wars . . . I’m already planning to read it again . . . Whishaw is an exciting addition to Canada’s fine roster of mystery writers."

"The writing . . . conjur[es] up nicely the ambiance of a 1940s west Canadian locale and develop[s] in depth both the characters and their interactions."

"A good historical mystery with a cast of characters that will provide plot lines for the series to come. Iona Whishaw is a writer to watch."

“Exquisitely written, psychologically deft . . . If you miss Mary Stewart’s sleuthing heroines, if you loved Broadchurch and its village of suspects, settle in, turn off the phone, and enjoy.” —Linda Svendsen, author of Sussex Drive and Marine Life

A simply riveting read by a master of the genre, A Killer in King's Cove is especially recommended the personal reading lists of dedicated mystery buffs, as well as an enduringly popular acquisition choice for community library Mystery/Suspense collections.

Other titles by Iona Whishaw

To Track a Traitor

A Killer in King’s Cove

A Match Made for Murder

It Begins in Betrayal

Death in a Darkening Mist