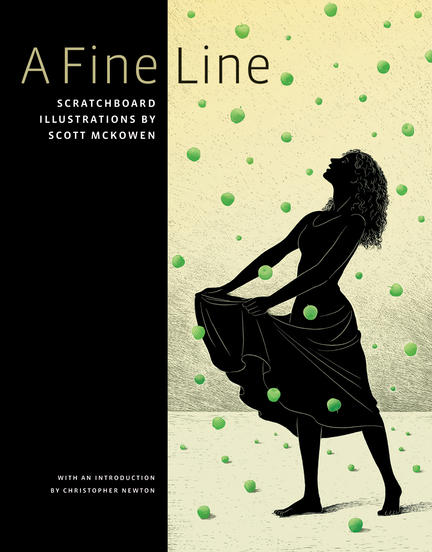 A glorious celebration of the scratchboard art of Scott McKowen.

Scratchboard artists use sharp instruments to scratch lines in areas of black ink on a prepared surface of hard chalk, exposing the white surface underneath. The finished drawings are then scanned, and the color is added digitally. The result is spectacular, similar to traditional woodcutting but in full color.

Scott McKowen is a renowned and prolific scratchboard artist and illustrator whose art has been featured in hundreds of books, magazines, theater posters and comic books. He may be best known for illustrating Neil Gamain's Marvel Comics series 1602 and the Unabridged Classics series.

A Fine Line is the artist's personal selection of 203 full-color and black-and-white reproductions. In a revealing twist on the traditional art book, McKowen gives a detailed analysis of each piece and describes what influenced his design. He even includes images of the reference works he consulted during the conceptual process and talks about the struggles he had arriving at a design solution.

Scott McKowen is an award-winning illustrator and graphic designer. He works in scratchboard, an engraving medium in which white lines are carved into a black surface with a sharp blade. McKowen has illustrated a number of titles for a wide range of publishers. Based in Stratford, Ontario, he operates the design studio Punch & Judy Inc., which creates theatre posters and graphics for leading performance art companies across North America.

CHRISTOPHER NEWTON is the Artistic Director of the Shaw Festival in Niagara-on-the-Lake, Ontario.

McKowen's mastery of line and texture, gift for arresting juxtapositions and perspectives, and fluency in drawing the human figure make for complex and breathtaking images that are at once old-fashioned and cutting edge. And he writes as crisply as he draws. McKowen shares his techniques for adding color to his incised drawings and tallies up what is lost and gained when scratchboard meets digital technologies. Most intriguing are his explanations of what elements in the plays (from Twelfth Night to Pinter's The Caretaker) and books (The Adventures of Tom Sawyer to Neil Gaiman's eight-part graphic novel 1602) inspired his brilliantly composed and beautifully executed illustrations. In McKowen's work, art meets literature, and both thrive.

McKowen points out that [scratchboard is] a dying medium, which is disappointing to learn after having been seduced by his mastery of the technique. Though clearly dishertened by its uncertain future, McKowen's passion is unmistakable and contagious.

In these days of computerized drawings, it's a treat to see a book like A Fine Line, featuring over 200 scratchboard illustrations by Scott McKowen, best known locally for his posters for the Shaw and Stratford festivals... This collection of McKowen's work, theatre posters as well as book illustrations for classic text and Neil Gaiman's graphic novel 1602, is hugely attractive and often surprising: Macbeth covering his face with his open palms, casts an illusive crown's shadow on the wall behind him; Carroll's Alice falls from the heights of a Victorian museum surrounded by dodos, playing cards, teapots and a white rabbit; a series of inventive topiary images designed for the 1990 Shaw Festival. Each illustration includes the artist's thoughts on his process and decisions, while the book's introduction is by the always articulate director Christopher Newton.

Most people don't think of posters and book covers as art. This new collection of work by Scott McKowen, an American-born illustrator who lives in Stratford, Ontario, just might change people's minds. McKowen's work demands a second look, if for nothing other than the startling detail and creative whimsy he can create using scratchboard, a once-popular but difficult art technique that, like so many other types of art, has lost ground to the computer-generated image... It's not only the technique McKowen uses, but it is the one he is most famous for, and its what gives his work its signature look and feel... The results are as unique as the method.

A Fine Line demonstrates there is a fine line between applied art and fine art when the former transcends its utilitarian role--whether promoting, marketing and advertising or visually supporting the written word--by providing esthetic pleasure and satisfaction.

The book [has] amazing breadth... Page after page of dramatic posters with vivid descriptions of thought process and research that went into creating them. The collection is a throwback to subtler times, when posters didn't scream but whispered to you, often in black and white images or gently colored scenes.

A Fine Line demonstrates [that] there is a fine line between applied art and fine art when the former transcends its utilitarian role--whether promoting, marketing and advertising or visually supporting the written word--by providing esthetic pleasure and satisfaction.

Scott McKowen's art of scratchboard drawing has come a long way since he illustrated an address book for the Stratford Shakespeare Festival back in 1987. Compared with his more recent work, those earlier illustrations resembling woodcut prints differ considerably from the exquisite pieces the Stratford graphic artist has been producing for music and theatre festivals and book covers. The beautifully illustrated book Mr. McKowen has just pulled together demonstrates the scope of his artwork over some 20 years and is a show-and-tell about a relatively rare creative form.

This collection showcases the career of McKowen, a scratchboard artist who designs theater posters and illustrates for books and magazines. Discussing his creative process and the influences behind some of his most successful images in straightforward language, McKowen explains how he tailors his theater posters to each director's individual vision; some of the most dazzling are designs for Macbeth, Chekhov's Three Sisters, and Shaw's Candida. In 2003, Sterling commissioned McKowen for a series of classic book reissues, including The Adventures of Tom Sawyer and Alice in Wonderland. Those images, also included, manage to capture the depth and scope of epic stories in a single, precise, stunning image; in his introduction, director Christopher Newton aptly describes McKowen's style as a lightness of heart which is not afraid to acknowledge the proximity of darkness.

Other titles by Scott McKowen

My True Love Gave to Me

The Thorn and the Blossom

Other titles by Christopher Newton

Its Heritage and Its Festival