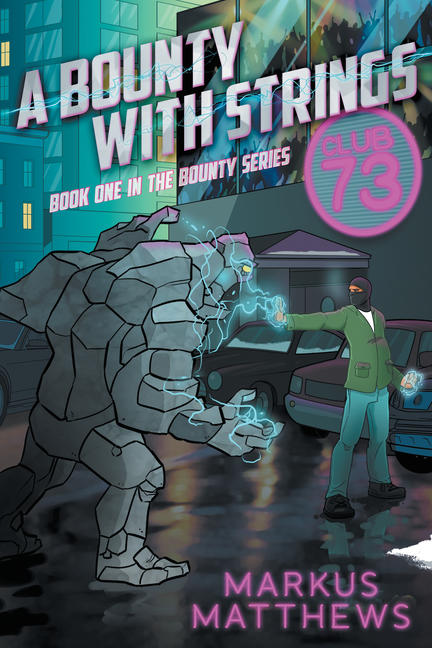 It’s been six years since the Hamilton Hurricane patrolled the skies above Hamilton, Ontario. The thirty-three-year-old once used his elemental powers of Air and Lightning to protect the city from natural disasters, super villains, and criminals. Unfortunately, crime fighting didn’t pay the bills, so he hung up his spandex. Now known as bounty hunter Zack Stevens, he spends his time hunting monsters for money.

While on the trail of a wanted Earth elemental, Zack finds he’s not the only one interested in the job. A Werepanther, a crazy vampire, a Mr. Hyde-type creature, and a blue-skinned alien attempt the bounty, and Zack helps clean up the mess, leaving him with a sense of responsibility for this odd crew who are now homeless and injured.

Thanks to a multimillion-dollar contract on one of their group, the hunters become the hunted, and Zack and his new acquaintances strike up an alliance. He has always worked alone but must find a way to lead his ragtag crew if they are to survive attacks by the underworld they fight against. A Bounty with Strings leads readers on a fast-paced adventure starring an unlikely group of companions who must learn to trust each other even as they work to outwit those who would destroy them.

It took a midlife crisis for Markus Matthews to realize his dream of becoming an author. After twenty-five years as an IT professional, he turned to writing fantasy fiction.

He and his wife, Kathy, live in southern Ontario, Canada, with their two cats. He enjoys drinking wine, cooking, playing video games, and reading urban fantasies.

Other titles by Markus Matthews

Book three in the Bounty series

A Bounty of Evil

Book two in the Bounty series