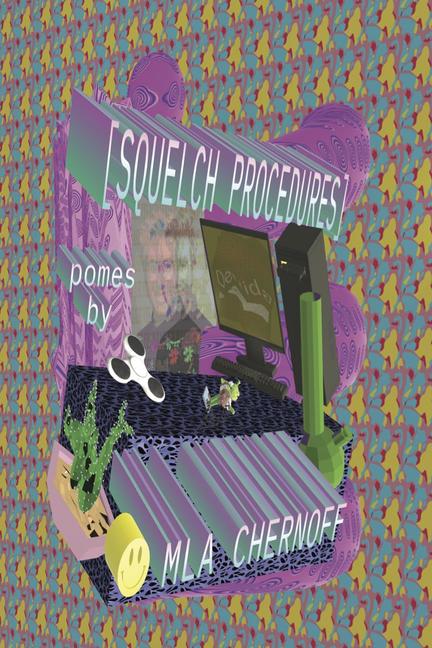 In [SQUELCH PROCEDURES], MLA Chernoff contemplates the ways that trauma, poverty, and strict gender norms rupture the concept of childhood. The tension of multiple meanings in the word "squelch" acts as a guide to Chernoff's unique voice, which uses language to swaddle intrusive thoughts and mimic defense mechanisms such as avoidance, depersonalization, and derealization. [SQUELCH PROCEDURES] is an ambitious attempt to show how healing and regression are often indistinguishable, while the past is always predisposed to happen more than once: first as tragedy, then as farce.

MLA Chernoff (they/them/@citation_bb) was born at Women's College Hospital in December of 1991 – oops. They are a six-hundred-year-old Jewish, non-binary pome machine, a Postmodern Neo-Marxist, and (somehow) a PhD Candidate at the Neoliberal University of York University, where they once held a SSHRC Doctoral Fellowship – no kidding. Their first chapbook, delet this, was released by Bad Books in 2018. Their second collection, TERSE THIRSTY, was released by Gap Riot Press in 2019. MLA has also been featured in The Bad Dog Review, Peach Mag, Spam Zine, Train, Trash Magazine, and other loveable publications. What a wild ride it's been for them! They are currently spewing out a sequel to TERSE THIRSTY, entitled TONGUE HUNGRY, but most of all, they are taking time to work on themself. MLA would like to add that they are a settler living, working, kissing, and hissing in Tkaronto, particularly in Treaty 13 territory.