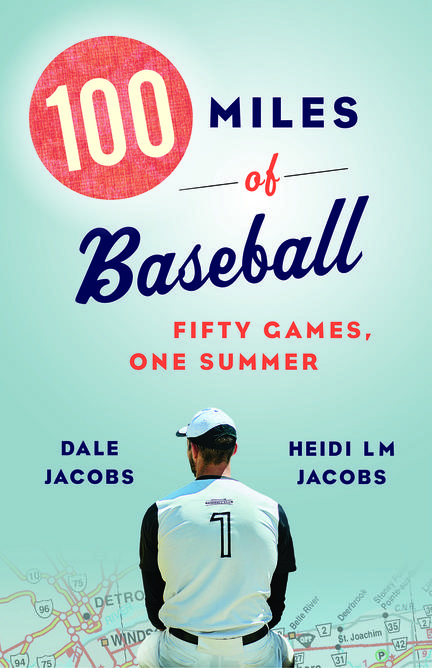 From sandlots to major league stands, two fans set out to recapture their love of the game.

For most of their lives together Dale Jacobs and Heidi LM Jacobs couldn’t imagine a spring without baseball. Their season tickets renewal package always seemed to arrive on the bleakest day of winter, offering reassurance that sunnier times were around the corner. Baseball was woven into the fabric of their lives, connecting them not only to each other but also to their families and histories. But by 2017 it was obvious something was amiss: the allure of another Sunday watching their Detroit Tigers had devolved to obligation. Not entirely sure what they were missing, they did have an idea on where it might be found: in their own backyard. Drawing a radius of one hundred miles around their home in Windsor, Ontario, Dale and Heidi set a goal of seeing fifty games at all levels of competition over the following summer. From bleachers behind high schools, to manicured university turf, to the steep concrete stands of major league parks, 100 Miles of Baseball tells the story of how two fans rediscovered their love of the game—and with it their relationships and the region they call home.

Heidi L.M. Jacobs was born and raised in Edmonton. While attending the University of Alberta, she worked a variety of retail jobs, including selling shoes. She is currently the English and History Librarian at the University of Windsor.

Dale Jacobs is professor of English at University of Windsor. He is author of Graphic Encounters: Comics and the Sponsorship of Multimodal Literacy and editor of The Myles Horton Reader: Education for Social Change. His essays on comics have appeared in Inks: The Journal of the Comics Studies Society, English Journal, College Composition and Communication, Journal of Comics and Culture, and Studies in Comics.

Praise for 100 Miles of Baseball

"Dale Jacobs and Heidi LM Jacobs wrote this book to renew their love of baseball, and reading it will renew yours. Together they successfully capture the ritual, romanticism, and enduring beauty of this beloved game, with a back-to-basics approach that will appeal to self-proclaimed experts and perceived outsiders alike. At its core, 100 Miles of Baseball is about endurance, nostalgia, hope, and gratitude, and is a book that handily affirms the game's very best rule--that baseball is for everyone."—Stacey May Fowles, author of Baseball Life Advice

"In 2018, Dale Jacobs and Heidi LM Jacobs set out on the quixotic mission to take in fifty baseball games, from high school parks to the major leagues, in an effort to recapture the magic of the sport as seen live from the stands. Most of the games were played in Michigan and Southern Ontario, but this account will delight any true fan of any team, anywhere. The unexpected twists and turns of the season—like a meaty novel—can disrupt expectations and break hearts at any time. This book is timely, because it explains why the Covid-disrupted sixty-game MLB season in 2020 was so unsatisfying. In sixty games, there was simply no time or space for the joy and redemption this book captures so vividly."—Susan Jacoby, author of Why Baseball Matters

"Like all the best poets, Jacobs sets the truth to music."—Judy Schultz

"Dale Jacobs writes a poetry of the real ... His is both a lived and lived-in poetry, meditative, its gentle voice filled nevertheless with urgency, savoring each finely-imaged moment, thirsting for the new, reclaiming the past that is always slipping from view."—Stephen C. Behrendt

"Heidi LM Jacobs nails it. Molly of the Mall relentlessly, hilariously conveys the ennui felt by anyone who has ever read a book and then gone to the mall ... Wicked good fun."—Kit Dobson

“I am positively besotted by Heidi LM Jacobs’ debut novel, Molly of the Mall, which I kind of suspect was written just for me."—Kerry Clare

“Inspired … They soulfully documented a 2018 road trip to the obscurest of ‘play ball’ destinations, all within a limited radius … The married authors complement each other—he’s the play-by-play guy; she, the colour commentator.”—Globe & Mail

"Their account is presented in each writer’s voice, alternating throughout the text, and is an effective way to describe the games and their reactions to them ... Together they present a full, absorbing account of any level of ball, making the point that the precision of the major leagues and the error-prone play in the minors all contain the same elements ... A solid win for the authors, who rediscovered a genuine joy in watching baseball wherever it is played."—Winnipeg Free Press

Other titles by Heidi L.M. Jacobs

Molly of the Mall

Other titles by Dale Jacobs

Sunday with the Tigers

Eleven Ways to Watch a Game

An Anthology of Canadian Humour