In this week’s Chat, I’m in conversation with Paul Carlucci, author of the deeply compelling new short story collection A Plea for Constant Motion.

In this week’s Chat, I’m in conversation with Paul Carlucci, author of the deeply compelling new short story collection A Plea for Constant Motion.

Reviewing the collection in the Toronto Star, Robert Wiersema says Carlucci “writes beautifully of ugliness, immersing the reader in the minds and hearts of characters most of us would like to avoid, or, more critically, would prefer to believe didn’t exist. It’s a perfect collection for a world which confronts us with increasing violence and ugliness every day.”

Paul Carlucci is the author of The Secret Life of Fission, which won the Danuta Gleed Literary Award. His stories have been widely published, appearing in The Puritan, Little Fiction, The Malahat Review, Descant, Carousel, EVENT, and Riddle Fence, among others. A recovering transient, he now lives in Ottawa after almost ten years of roaming across Canada and abroad.

THE CHAT WITH PAUL CARLUCCI

Trevor Corkum: This is a dark, moody, compassionate, and generous collection. You mention in the acknowledgements that you worked with your editor to sift through a large number of stories. How did you end up making your selections? What was left out?

Paul Carlucci: Thanks! Janice Zawerbny helped me pick them out. She was the fiction editor at Anansi, the one to sign me, and the one who worked on most of the manuscript with me, as well. I think we had seventeen or so stories to choose from, plus a few more that I didn’t send in.

One story was actually called “A Plea for Constant Motion,” and it was about a guy who gets into some trouble riding a train from Zambia to the coast of Tanzania. I think she liked that one, but I fell out with it pretty soon after looking at it more closely. Another was called “Elephants,” and it wasn’t bad, but it seemed a little too much like “Hippos,” so we canned that. Another was called “Versions,” and it was meant to close off a triplet of stories that involve Trevor (“These Rats Have a Job to Do” and “Burger Life Fitness” are the two preceding stories). I dunno. It was a bit of a Natural Born Killers type thing and it wasn’t very good, so we cut it.

TC: This is your first collection after the Danuta Gleed Award-winning The Secret Life of Fission. Did you feel any pressure writing a follow-up?

PC: No, not really. I’d already written a lot of the stories and although winning the award was a great experience, it didn’t bring me much attention, so I didn’t feel like I was being watched or that many people cared if I ever wrote again. I knew the Plea stories were better and I was happy to have made progress and happy to find a publisher.

I knew the Plea stories were better and I was happy to have made progress and happy to find a publisher.

TC: The opening story, “My New Best Friend In Exile,” is one of my favourites. In it, a lonely art teacher reflects on his relationship with a quiet neighbour with a dark secret. The story masterfully builds suspense, ricocheting in new directions every couple of pages. Who influenced your own work? Any particular favourites?

PC: Thanks! My first favourite authors were Stephen King and Clive Barker. I was fully gripped by their stuff when I was a preteen, like just ravenous page-turning possession. Pet Sematary. Books of Blood. It. The Damnation Game. Those stories were so intense for me, and they were unapologetically interested in plot and escalation. It’s easy to smirk at that stuff, especially Stephen King, but that dude swept my imagination completely into his own, and he made me think about books when I was playing tag or eating pizza or whatever. I wanted to go home and read, and very quickly I wanted to write.

It’s easy to smirk at that stuff, especially Stephen King, but that dude swept my imagination completely into his own, and he made me think about books when I was playing tag or eating pizza or whatever. I wanted to go home and read, and very quickly I wanted to write.

In high school and college, I went through different phases. Typical stuff, I think. The first so-called serious literature I read was Ernest Hemingway. I also got into William Burroughs, Brett Easton Ellis. Aggressively stylish and sorta sick stuff like that.

These days I’m a fan of George Saunders, Karen Russell, Zsuzsi Gartner, Patrick deWitt, Jeff Vandermeer, Brian Evenson, Heather O’Neill. I really liked Otessa Moshfegh’s first book, McGlue, and last year’s By Gaslight by Steven Price was also really, really good. I like some sci-fi, too, vintage stuff by Huxley or Wells, and there will always be those classic short-story writers like Flannery O’Connor or Frank O’Connor, plus the cool stuff you find in journals, like yourself (looking forward to your novel) or David Margoshes (I know he’s got books, too; I just first came across him in The Malahat Review).

TC: Your stories are dexterous, and you handle multiple points of view with ease. “These Rats Have a Job to Do,” for example, tells the story of a troubled teenage girl coping with a dysfunctional home life. What challenges do you face writing characters whose lives may be different from your own?

PC: That particular story was a bit tough. Initially it was written first person, but Janice wasn’t really buying the voice and she helped me see that it sounded more like a boychild than a girlchild. I was struggling and struggling, but I couldn’t get it, so I just printed it out, put it beside my computer, and started it over third-person mimetic, and there was some alchemy there and it wound up working better.

I also find a good little trick in character development is grafting reality onto your fiction (sounds kind of obvious, but it’s worth underscoring). Let’s say you’ve got this character that just won’t go dimensional. He or she is just stubbornly flat. You can reach into your personal life, or your memory, or even the zeitgeist, and swipe a feature or two from someone you’ve really known, or someone who really exists. You knead it a little here and there and then you graft it onto your flatty, and if the surgery takes, you get someone more lifelike. From there, you get this sort of interplay between a developed character and the setting, plot, and other characters, and that former flatty grows more and more just as a result of coming into contact with and reacting to those other elements.

TC: What’s next for you, Paul? Any current projects underway?

I also find a good little trick in character development is grafting reality onto your fiction (sounds kind of obvious, but it’s worth underscoring). Let’s say you’ve got this character that just won’t go dimensional. He or she is just stubbornly flat. You can reach into your personal life, or your memory, or even the zeitgeist, and swipe a feature or two from someone you’ve really known, or someone who really exists.

I have a couple collections of linked stories with my agent. One’s set in a high-rise building in the Northwest Territories and the other in a suburb that seems kind of like it’s in Ontario. Those are looking for a home, and at the same time I’ve been working on a novel very, very loosely based on this real-life voyageur named Alexis St. Martin. He survived a gunshot wound that left behind a gastric fistula, and his overly ambitious doctor ran all kinds of experiments on him. It’s been great fun to write, more enjoyable than anything I’ve ever worked on before.

Bev is named after the character from It, because her mom loves Stephen King, especially the movies, but also the books, although she stopped reading when everything changed. Sissy is named after Sissy Spacek, who stars in the movie Carrie, which Bev thinks is old and stupid, even though it’s her mother’s favourite thing to watch on the VCR, and sometimes she’ll watch it again and again, just lying there with crumbs all over her nightie, which she wears all day despite what it’s called.

Her mom doesn’t talk anymore, but Bev thinks she knows how Sissy got her name. She’s got a theory: Sissy’s pretty in a typical way, like with freckles and pale skin and that sort of thing. When she was in school, boys used to pull her hair and spit on her back. Lots of pretty girls get that kind of treatment. But those girls aren’t super pretty, because boys don’t taunt or torment super pretty girls. They just get all clumsy and awkward. Maybe her mom took one look at little baby Sissy and just knew she’d never grow up to be a super pretty girl, and that’s what happened: Sissy never did, not when she was thin and tired, not when she was fat and pregnant, and not now that she’s somewhere in between. But plain or not, you can’t push Sissy too far or she’ll snap, which wouldn’t be any good for anyone, and maybe their mom’s always known that too.

Bev developed this theory years ago, when Sissy used to spend a lot of time at the Chester house next door. She came home one morning, hunkered over the kitchen sink, and chugged one glass of water after another. Bev had been awake for hours already, climbing on the counters and raidng the cupboards, opening the fridge door and slamming it shut, but she still hadn’t found anything to eat, so she started poking Sissy in the thigh, singing her name like Alvin and the Chipmunks, until finally Sissy snapped. She grabbed Bev by the shoulder, fingers like iron bars, and she said Bev was named after Beverly from It, who let all the boys have sex with her in a sewer tunnel so the group could have something to share after they killed the evil clown. They don’t show that part in the movie — Bev has seen it — but it’s in the book, and Sissy said mom always knew Bev would work best on her back. She said Bev would be an ugly slut when she grew up, and mom knew that from the moment Bev was born.

Bev isn’t sure about this story, but it might be true. There’s no way to really know, because her mom can’t really talk, and probably wouldn’t admit to something like that even if she could.

Excerpted from “These Rats Have a Job To Do” from A Plea for Constant Motion, copyright (c) 2017 by Paul Carlucci. Reprinted with permission from House of Anansi Press, Toronto. www.houseofanansi.com 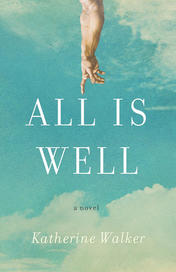 All is NOT Well

Off-beat, heartfelt and hilarious, we could not have loved Katherine Walker's All is Well any better, and her recommended reading list for us is just …