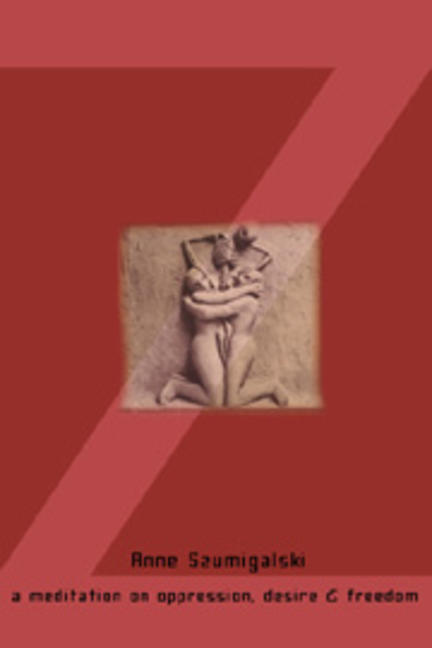 Z: A Meditation on Oppression, Desire and Freedom is an astonishing first stage play by the internationally acclaimed and award-winning poet Anne Szumigalski which explores the relationship between captive and captor and the terrible sacrifices human beings must make to survive. When the concentration camps were opened at the end of World War II, Anne Szumigalski worked with the survivors as a translator for the British Red Cross. “It made me look at life,” she says, “in a completely different way.” In Z, Szumigalski translates that profound and disturbing experience into an amazing theatrical event—a blend of drama, poetry and dance.

Anne Szumigalski was born in England, but lived in Saskatoon for over forty years and was a major influence behind the vibrant literary activity in Saskatchewan. She was an internationally known and highly respected poet, essayist and editor who was regularly invited to give readings around the world in places as diverse as Oxford, Boston and Malaysia. The author of fifteen books, including the post-humously published Fear of Knives, Anne won the Governor General's Award for Poetry in 1995 for Voice, a collaboration with visual artist Marie Elyse St. George. She published nine collections of poetry including Woman Reading in Bath, Doctrine of Signatures, Dogstones and Rapture of the Deep. In addition, her poetry appeared in countless Canadian and international journals and magazines. Her poetry was also published in numerous anthologies, including Out of Place, Soho Square III and Towards 2000. Anne collaborated with Terrence Heath on four radio dramas, a play for voices entitled Wild Man's Butte, and on the poetry collection Journey/Journée. She also edited a collection of Caroline Heath's poetry entitled Why Couldn—t You See Blue? Over the years, Anne was the recipient of many major literary awards and prizes, including two Saskatchewan poetry awards, two Writers” Choice Awards and two nominations for the Governor-General's Award. Anne received a Founders” award from the Saskatchewan Writers Guild in 1984, was named “Woman of the Year” by the Saskatoon YWCA in 1989 and was honoured with the Saskatchewan Order of Merit and a Life Membership from the League of Canadian Poets. Anne was born in London, England and immigrated to Saskatchewan in 1951. Anne's passing in April 1999 was mourned by all those she had touched.

Excerpt: Z: A Meditation on Oppression, Desire and Freedom (by (author) Anne Szumigalski)

Horst: That’s before the Party told us what you Yids are doing to the country.

Itzak: And then you decided to eliminate—to exterminate us.

Horst: Exterminate” Eliminate” What difference does that make” We are all going to be eliminated. We are all for the big drop. When things get tough the Big Boys will call me up, forty-two years old or not. They’ll send me off to the front and I’ll end up as dead as any Jew. A bullet in the belly—blown to bits in a minefield, dead is dead. What’s the difference, a sniff of gas, a piece of shrapnel in the chest. We will have suffered, you and I, with the rest. We will have died and been forgotten. Neither of us is going to survive. Whatever that means—survival.

They go on smoking. Train is getting louder as it approaches.

Itzak: And here they come, the poor victims. Last stop before eternity.

Horst: And for those who must be selected. Have you prayed for them too?

Itzak: We have. We know the rules. Most of us have been here for months. Some of us for years.

Itzak: The unlucky ones some would say. Thousands are at peace already. It’s not difficult to envy them. When they are dead they receive their names back. When we pray we repeat their names. (He begins to softly do so.) Jankel, Shmuel, Dvorah, Chanaa, Mordecai, Yussel, Moishe, Dovid, Judel.

Itzak had begun this litany of names softly enough, but the train is coming in and towards the end he is yelling out the names against the sound of the train.

Horst is angry with Itzak. He knows how to get his own back.

Horst: And then there is that other matter, that other little matter…

Itzak: What do you mean?

Horst: The little matter of the selection. One out of every hundred to make room for the new boys, eh?

Itzak: It’s not something I’m likely to forget. But that’s your business.

Itzak: That’s the rule. I have never…

“Recurring images—create an almost hypnotic effect. Z succeeds through its poetry and its insight into the hearts of characters.” — NeWest Review “Some terribly haunting word-pictures—and a brilliantly drawn relationship between Itzak and his guard, Horst.?” Saskatoon Star-Phoenix

Other titles by Anne Szumigalski

When Earth Leaps Up

A Book of Fables