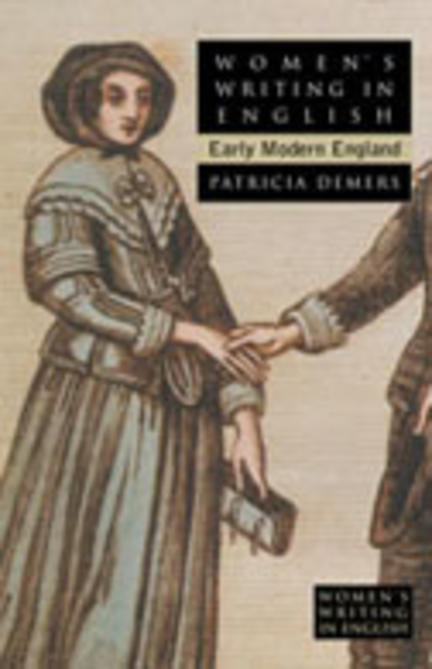 In this introduction to the diversity and scope of the writing by women in England from the beginning of the sixteenth century to the restoration of the monarchy in 1660, Patricia Demers discusses the creative realities of women writers' accomplishments and the cultural conditions under which they wrote.

There were deep suspicions and restrictions surrounding the education of women during this period, and thus the contributions of women to literature, and to the print industry itself, are largely unknown. This wide-ranging examination of the genres of early modern women's writing embraces translation (from Latin, Greek, and French) in the fields of theological discourse, romance and classical tragedy, original meditations and prayers, letters and diaries, poetry, closet drama, advice manuals, and prophecies and polemics. A close study of six major authors – Mary Sidney, Aemilia Lanyer, Elizabeth Tanfield Cary, Lady Mary Wroth, Margaret Cavendish, and Katherine Philips – explores their work as poets, dramatists, and romantic fiction writers. Demers invites readers to savour the subtlety and daring with which these women authors made writing an expressly social craft.

A professor in the Department of English and Film Studies at the University of Alberta, Patricia Demers is the author or editor of eleven books and over fifty articles. Her research interests range widelyâ??from early modern womenâ??s writing, Shakespearean and Jacobean drama, feminist hermeneutics, and childrenâ??s literature to contemporary Canadian womenâ??s writing. She is the recipient of a Rutherford Award for Excellence in Undergraduate Teaching and a McCalla Research Professorship. In September 2005 she was awarded the University Cup, the University of Albertaâ??s highest recognition for outstanding teaching and research. In 2006, she was appointed University Professor.

Other titles by Patricia Demers

Cultural Mapping and the Digital Sphere

Pioneer Journalist of the Canadian West

Champion of the West

The Beginning of Print Culture in Athabasca Country

A Facsimile Edition & Translation of a Prayer Book in Cree Syllabics by Father Émile Grouard, OMI, Prepared and Printed at Lac La Biche in 1883 with an Introduction by Patricia Demers

Coelebs in Search of a Wife

From Instruction to Delight

An Anthology of Children's Literature to 1850