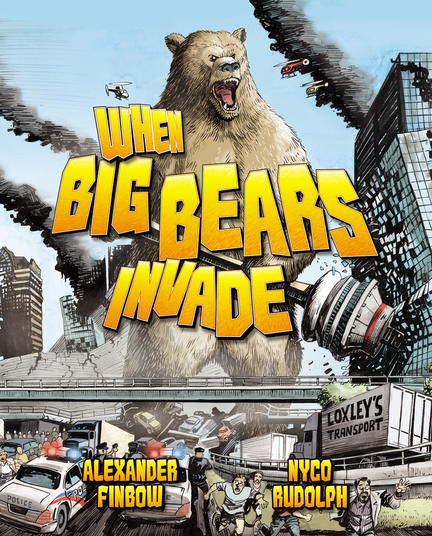 Children, children. Gather round your grandmother, and I will tell you of the time before the benevolent bears showed humanity how to live in harmony with the world. A time when humans ran amok, threatening to destroy the very world we all share so happily now. A time when the Big Bears made sure humanity paid attention to their message. And it happened here, in our very own Canada.'

Alexander Finbow - Canmore based filmmaker and author, creator of the award winning Loxleys series of original graphic novels, co-writer of The Loxleys and Confederation with Mark Zuehlke and Niigaanwewidam James Sinclair, author of the forthcoming historical-fantasy ogn Blood Light and action comic series 24 Hours in London. Originally from England, Alexander emigrated to Canada in 2009.

Nyco Rudolph - I got my start by designing show posters, album covers and merchandise for bands in the local Winnipeg music scene. My portfolio of commission work was growing bigger and bigger, but my mind was overflowing with my own ideas that I wanted to bring to life. I committed to my art full-time spring 2016, with tons of new prints, merchandise and I've got a couple of graphic novels and comics in the works too! I've always created for my own satisfaction and enjoyment, but what really keeps me going is seeing people dig my work. Whether they're walking past my table at a convention and they burst out laughing, or they're liking and sharing my art on my Facebook and Instagram, it means so much as an artist to have people react and respond to what I've created. When I'm not at my drawing desk, I'm on the road bringing my special flavour of art to the Canadian masses: an eclectic mix of propaganda style, anthropomorphic animals, old school 3D and film noir.

Other titles by Alexander Finbow

The Loxleys and Confederation