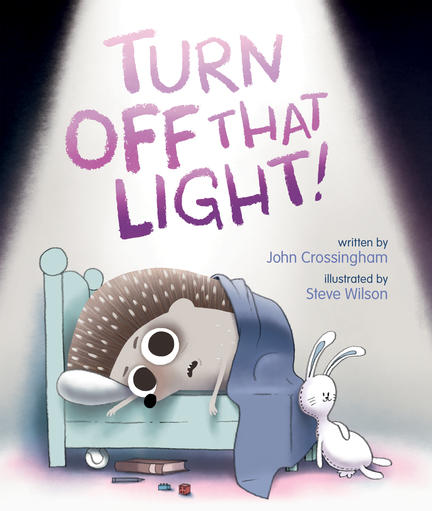 A little hedgehog is fast asleep when all of a sudden, the light clicks on. He is NOT happy about being woken. “Turn off that light!” he demands. The light switches off. And then on again. And off. And on. “Who keeps doing that?!” The hedgehog bumbles around, exasperated, in a flurry of onomatopoeia — GRRR!! OW! CRUNCH. BANG! — as his room mysteriously goes from dark to light over and over and over again.
It soon becomes clear that the cause of the light switching on and off is you, the reader, turning the page. The hedgehog decides to outsmart you by building his own light, a process that comes with its own hilarious complications.
Comics-style speech bubbles, wordplay and humor make this a fun and interactive story where the reader plays a starring role — especially when it’s revealed that you only turned the light on to bring the hedgehog a glass of water, which he forgot he asked for.

JOHN CROSSINGHAM has spent most of his life playing music and writing words. In addition to having edited with OKB, he is author of Learn to Speak Music. A veteran of numerous bands, including Broken Social Scene and Raising The Fawn, he has toured much of the world, played on Conan, Letterman, and the Junos, and has released several albums and EPs. He has also written and edited dozens of children's books, as well as written about music for FASHION and Chart magazines. He lives in Toronto, Ontario.

When Steve Wilson was a little kid he found real Bigfoot tracks and crop circles. It's true! Since then he has been drawing weird things like UFOs, mythological monsters, aliens, ghosts, animals, cars, superheroes, clouds, and boats. He has illustrated two children’s books: Lines That Wiggle and Shapes That Roll. He also works in TV animation design and is a member of Trio Magnus. He lives in Toronto, Canada.

"Smart and creative...the premise of "Turn Off That Light!" is strong and universal. Recommended."

"Once young ones catch on to what's happening, they will no doubt demand repeat reads."

Other titles by John Crossingham

A Guide to Creating, Performing, and Promoting Your Songs