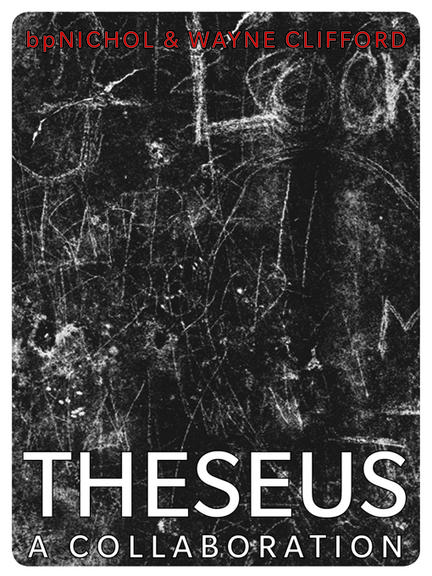 The value of Theseus is as much about its pedigree as the writing itself. The collaboration for this new book began in the autumn of 1966. bpNichol and Wayne Clifford had worked together early in their literary careers; in fact, Clifford had been the editor of Nichol's first trade book, published with The Coach House Press. To begin, Nichol had also wanted to include two West Coast poets in the writing process. This didn't work out, so Nichol and Clifford rewrote a section to produce Part One of the present text. Part Two was composed over many years of revisiting and revising. These long gestation periods allowed the writers the space and time to re/consider, knowing the text would always be there to augment. After Nichol's death, Clifford completed the work, adding Part Three - composed of elements of Nichol's Martyrology - as a means of tribute, eulogy, acceptance and lie. Thematically, the text focuses on the Theseus-Ariadne-Minotaur cycle: in Part One, the authors were young enough to "re=verb=erate" when struck with the myth; Part Two allowed Nichol and Clifford the space to step back in order to devise a way to say "love" more acutely; finally, Part Three presents a stunning example of one man's grief for a lost friend and collaborator. All told, Theseus is an important text that adds considerable gravitas to Nichol's poetic legacy, and the unique partnership between the two authors allows Nichol's words to be extended beyond the grave.

Wayne Clifford came to Grand Manan, New Brunswick as a permanent resident in 2007 after thirty-five years of college teaching. A former resident of Kingston, Ontario and Halifax, Nova Scotia, he and his wife, M.J. Edwards, have built a house at Rocky Corner on the Whistle Road, where she practices as an artist, and he writes more or less full-time. Author of more than a dozen poetry books and chapbooks, Wayne is also an amateur musician, artist, and award-winning designer. He holds a BA from the University of Toronto, and an MA and MFA from the prestigious international Writers' Workshop at The University of Iowa, but appreciates that his adopted home has much to teach him.

bpNichol (Barrie Phillip Nichol) was born September 30, 1944 in Vancouver, British Columbia. His writing is, by definition, engaged with what he called "borderblur": in his lifetime he wrote (somewhere between) poetry, novels, short fiction, children's books, musical scores, comic book art, collage/assemblage, and computer texts. Nichol was also an inveterate collaborator, working with the sound poetry ensemble The Four Horsemen (whose members were Nichol, Rafael Barreto-Rivera, Paul Dutton, and Steve McCaffery); Steve McCaffery as part of the Toronto Research Group (TRG); the visual artist Barbara Caruso; and countless other writers. In the mid 1980s bpNichol became a successful writer for the children's television show Fraggle Rock, produced by Jim Henson. His early work in sound was documented in Michael Ondaatje's film Sons of Captain Poetry. A second film has been made on Nichol, bp: pushing the boundaries, directed by Brian Nash; he also appears in Ron Mann's film Poetry in Motion. bpNichol died in Toronto, Ontario on September 25, 1988.

Theseus: A Collaboration is many things & will repay the returning reader, but it is perhaps most forcefully a gift of friendship, as true collaboration always is.
- Douglas Barbour

In Theseus, Wayne Clifford and the late bpNichol summon each other's voices as they follow Ariadne's mythological thread and its relational language to a repository of poetic essence and spirit. Their dialogue, years after Nichol's death, is unexpected, wondrous, and truly extraordinary.
- Lola L Tostevin

There are collaborations, and you may guess this is one, which rise above their seams. Built on the inseparable trio of Theseus, Ariadne, and the Minotaur the duo of bpNichol and Wayne Clifford quite soon, and adroitly, infuse this ancient myth with a contemporaneity "at the heart of the matter" where word play rides out and is given life on the golden thread of breath. The rewards are many as you follow the now multiple threads of word play, pun and dialogue, both interior and exterior, where at the heart of things is all encompassing love; the you, the me, the us. I urge you; read, feel, follow these threads to the centre of things.
- Brian Dedora

[Theseus is] a fascinating read, in the way the two voices play off each other and how it allows Nichol's writing to live on beyond him...
- Contemporary Verse 2

Other titles by bp Nichol

parts of an autobiography

Konfessions of an Elizabethan Fan Dancer

The Critical Writings of bpNichol