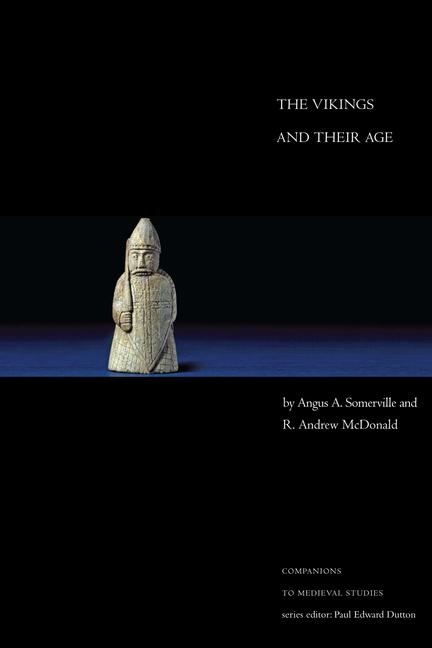 This book, the first in our Companions to Medieval Studies series, is a brief introduction to the history, culture, and religion of the Viking Age and provides an essential foundation for study of the period.

The companion begins by defining the Viking Age and explores topics such as Viking society and religion. Viking biographies provide students with information on important figures in Viking lore such as Harald Bluetooth, Eirik the Red, Leif Eiriksson, and Gudrid Thorbjarnardaughter, a female Viking traveler. A compelling chapter entitled "How Do We Know About the Vikings?" and a case study on the wandering monks of St. Philibert introduce students to the process of historical inquiry. The book concludes with a discussion of the impact of the Vikings and their legacy.

Pedagogical resources include a detailed chronology, study questions, a glossary, 4 maps, and 14 images. Text boxes provide information on outsider perceptions of the Vikings, a detailed account of a Viking raid, and a description of a chieftain's dwelling in Arctic Norway. This study also benefits from a multi-disciplinary approach including insights and evidence from such diverse disciplines as archaeology, philology, religion, linguistics, and genetics.

Angus A. Somerville is Associate Professor in the Department of English Language and Literature at Brock University. He is a contributor to The Historical Thesaurus of the Oxford English Dictionary (2010) and co-author of The Vikings and Their Age (2013).

R. Andrew McDonald is Professor, Department of History, Brock University, and former Director of the Centre for Medieval and Renaissance Studies at Brock University. His previous titles include Manx kingship in its Irish Sea setting, 1187-1229: King Rognvaldr and the Crovan dynasty (Four Courts Press, 2007) and Outlaws of Medieval Scotland: Challenges to the Canmore Kings 1058-1266 (Tuckwell Press, 2003).

"The Vikings and Their Age, and its companion Reader, will be useful to those planning introductory courses on the Vikings. For the student, it conveys basic information on a good range of topics, concisely presented, and with an apparatus that eases its accessibility to absolute newcomers. Its attention to source criticism makes it a suitable introduction to historical methodologies for new historians, or to literature students who seek to arrive at a better understanding of the period as a whole."

Other titles by Angus A. Somerville

Other titles by R. Andrew McDonald

The Viking Age: A Reader