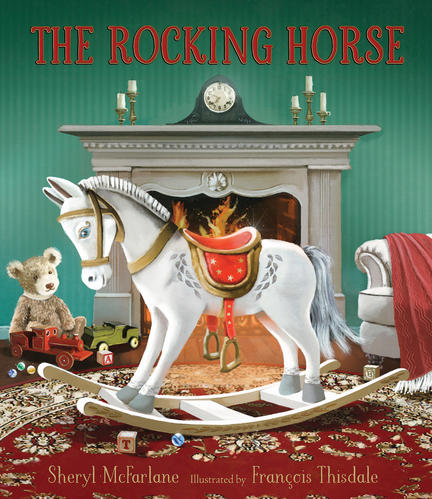 When the rocking horse is first given to his boy, they imagine grand adventures together: chases in the wild west, dashes across medieval drawbridges, and daring rodeo performances. Then as the boy grows up, they play together less and less. The rocking horse begins to despair until the boy’s little sister climbs on his back and he learns he has love enough for more than one child. But one day she too will outgrow their adventures. What future awaits a treasured toy with so much love left to give?
In The Rocking Horse, award-winning author Sheryl McFarlane celebrates the imaginative play of childhood while acknowledging that growing up means reaching out and also letting go. Award-winning illustrator François Thisdale’s distinctive art captures the warmth of nostalgia and the brightness of possibility. The rocking horse, like any truly treasured toy, brims with both in equal measure.