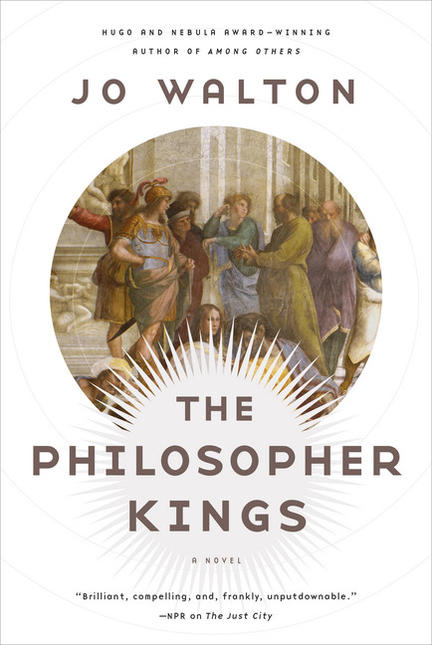 From acclaimed, award-winning author Jo Walton:Philosopher Kings,a tale of gods and humans, and the surprising things they have to learn from one another. Twenty years have elapsed since the events ofThe Just City. The City, founded by the time-traveling goddess Pallas Athene, organized on the principles espoused in Plato'sRepublic and populated by people from all eras of human history, has now split into five cities, and low-level armed conflict between them is not unheard-of.

The god Apollo, living (by his own choice) a human life as "Pythias" in the City, his true identity known only to a few, is now married and the father of several children. But a tragic loss causes him to become consumed with the desire for revenge. Being Apollo, he goes handling it in a seemingly rational and systematic way, but it's evident, particularly to his precocious daughter Arete, that he is unhinged with grief.

Along with Arete and several of his sons, plus a boatload of other volunteers--including the now fantastically aged Marsilio Ficino, the great humanist of Renaissance Florence--Pythias/Apollo goes sailing into the mysterious Eastern Mediterranean of pre-antiquity to see what they can find—possibly the man who may have caused his great grief, possibly communities of the earliest people to call themselves "Greek." What Apollo, his daughter, and the rest of the expedition will discover…willchange everything.

Jo Walton has published thirteen novels, most recently Necessity. She has also published three poetry collections and an essay collection. She won the John W. Campbell Award for Best New Writer in 2002, the World Fantasy Award for Tooth and Claw in 2004, the Hugo and Nebula awards for Among Others in 2012,  and in 2014 both the Tiptree Award for My Real Children and the Locus Non Fiction award for What Makes This Book So Great. She comes from Wales but lives in Montreal where the food and books are much better. She gets bored easily so she tends to write books that are different from each other. She also reads a lot, enjoys travel, talking about books, and eating great food. She plans to live to be ninety-nine and write a book every year.

"This continues Walton's fascinating exploration of what it might be like if people lived according to Platonic ideals but with messy human emotions and urges complicating matters at every turn."—Library Journal

"If there's one thing Walton is brilliant at — and there are roughly 1 million of those — it's not letting you know quite what kind of story you're in, and leading you to relish the discovery."—NPR

Other titles by Jo Walton

Or What You Will

A Novel of Many Returns

An Informal History of the Hugos

The Complete Trilogy (The Just City, The Philosopher Kings, Necessity)

What Makes This Book So Great

Re-Reading the Classics of Science Fiction and Fantasy