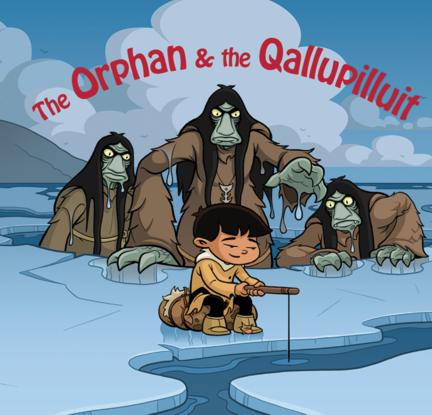 After saving the children at his camp from an ogress, the orphan goes in search of a home. But he meets some scary creatures along the way!

Neil Christopher is an educator, author, and filmmaker. He first moved to the North many years ago to help start a high school program in Resolute Bay, Nunavut. It was those students who first introduced Neil to the mythical inhabitants from Inuit traditional stories. The time spent in Resolute Bay changed the course of Neil’s life. Since that first experience in the Arctic, Nunavut has been the only place he has been able to call home. Neil has worked with many community members to record and preserve traditional Inuit stories. Together with his colleague, Louise Flaherty, and his brother, Danny Christopher, Neil started a small publishing company in Nunavut called Inhabit Media Inc., and has since been working to promote Northern stories and authors.

Jim Nelson is a freelance artist based in Chicago, Illinois. He has a lifelong interest in myths, legends, and the fantastic.

Other titles by Neil Christopher

Mia and the Monsters Search for Colours

I can be myself when everyone I know is dead...

Mia and the Monsters Search for Shapes

Mia and the Monsters: The Monsters Learn to Share

Mia and the Monsters: Staying Warm in the Winter (Syllabics/Roman)

Other titles by Jim Nelson

The Gnawer of Rocks

On the Shoulder of a Giant Big Book

Tales from the Wild Side