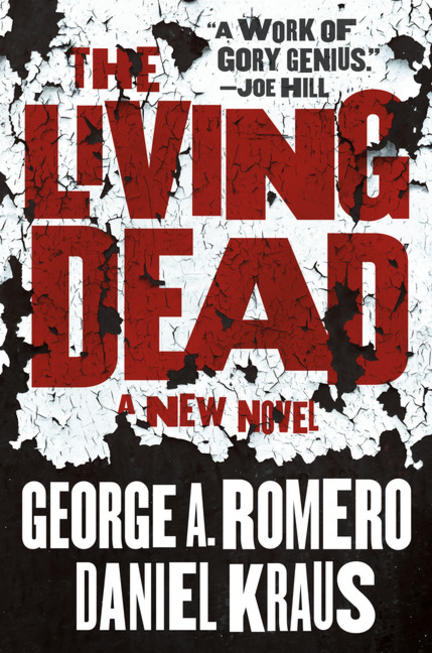 “A horror landmark and a work of gory genius.”—Joe Hill, New York Times bestselling author of The Fireman
New York Times bestselling author Daniel Kraus completes George A. Romero's brand-new masterpiece of zombie horror, the massive novel left unfinished at Romero's death!
George A. Romero invented the modern zombie with Night of the Living Dead, creating a monster that has become a key part of pop culture. Romero often felt hemmed in by the constraints of film-making. To tell the story of the rise of the zombies and the fall of humanity the way it should be told, Romero turned to fiction. Unfortunately, when he died, the story was incomplete.
Enter Daniel Kraus, co-author, with Guillermo del Toro, of the New York Times bestseller The Shape of Water (based on the Academy Award-winning movie) and Trollhunters (which became an Emmy Award-winning series), and author of The Death and Life of Zebulon Finch (an Entertainment Weekly Top 10 Book of the Year). A lifelong Romero fan, Kraus was honored to be asked, by Romero's widow, to complete The Living Dead.
Set in the present day, The Living Dead is an entirely new tale, the story of the zombie plague as George A. Romero wanted to tell it.
It begins with one body.
A pair of medical examiners find themselves battling a dead man who won’t stay dead.
It spreads quickly.
In a Midwestern trailer park, a Black teenage girl and a Muslim immigrant battle newly-risen friends and family. On a US aircraft carrier, living sailors hide from dead ones while a fanatic makes a new religion out of death. At a cable news station, a surviving anchor keeps broadcasting while his undead colleagues try to devour him. In DC, an autistic federal employee charts the outbreak, preserving data for a future that may never come.
Everywhere, people are targeted by both the living and the dead.
We think we know how this story ends.
We. Are. Wrong.

GEORGE A. ROMERO’s classic zombie movie cycle begins with the groundbreaking Night of the Living Dead and Dawn of the Dead, which are followed by four sequels. Romero directed two Stephen King projects, Creepshow and The Dark Half, and created the TV series Tales From the Darkside. Originally from New York City, Romero attended Carnegie Mellon in Pittsburgh. He and his wife, Suzanne, lived in Toronto for over 10 years. George A. Romero died in 2017.
DANIEL KRAUS co-authored the New York Times bestselling The Shape of Water with Guillermo del Toro, based on the idea the two created for the Academy Award-winning film. Their earlier collaboration, Trollhunters, was adapted into an Emmy Award-winning Netflix series. Kraus's novel The Death and Life of Zebulon Finch was named one of Entertainment Weekly's Top Ten Books of the Year, and his novel Rotters was a finalist for the Bram Stoker Award. Kraus lives with his wife in Chicago.

“The Living Dead is a sprawling, timely, scary epic that honors the zombie tradition but also goes in new directions and takes risks that pay off.”—Paul Tremblay, author of A Head Full of Ghosts and Survivor Song
“If Night of the Living Dead was the first word in the dead rising field, The Living Dead is the last word. A monumental achievement.”—Adam Nevill, author of The Ritual
“Like a lost Romero classic, which will play out on the inside of your skull long after you've finished it.”—Clive Barker
“A work of gory genius marked by all of Romero's trademark wit, humanity, and merciless social observations. How lucky are we to have this final act of Grand Guignol from the man who made the dead walk?”—Joe Hill, New York Times bestselling author of The Fireman
“Every zombie movie lives in the shadow of Romero, but he never got the budget to work at the scale he deserved. Fortunately, Daniel Kraus delivers the epic book of the dead that Romero began. That shadow just got a whole lot bigger.”—Grady Hendrix, author of My Best Friend’s Exorcism
"[A] phenomenally enrapturing and reverberating work of art. Vividly illuminates the minds of the characters.”—Booklist on The Shape of Water by Guillermo del Toro and Daniel Kraus

Other titles by George A. Romero

The Little World of Humongo Bongo

by (author) George A. Romero