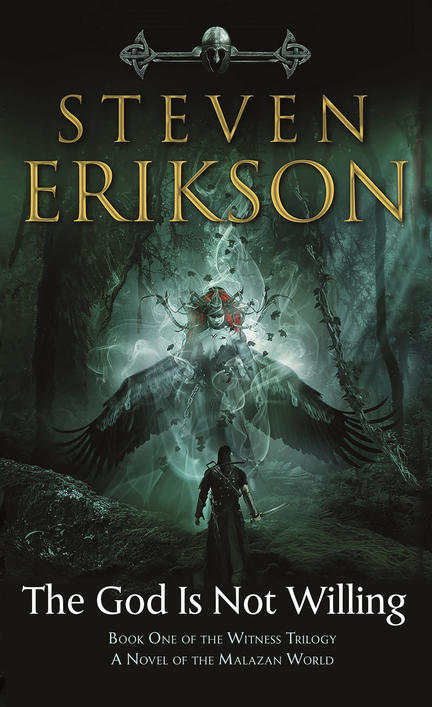 New York Times bestselling author Steven Erikson continues the beloved Malazan Book of the Fallen with this first book in the thrilling Witness sequel trilogy, The God is Not Willing .

Many years have passed since three warriors brought carnage and chaos to Silver Lake.

Now the tribes of the north no longer venture into the southlands. The town has recovered and yet the legacy remains.

Responding to reports of a growing unease among the tribes beyond the border, the Malazan army marches on the new god's people. They aren't quite sure what they're going to be facing.

And in those high mountains, a new warleader has risen amongst the Teblor. Scarred by the deeds of Karsa Orlong, he intends to confront his god even if he has to cut a bloody swathe through the Malazan Empire to do so.

Further north, a new threat has emerged and now it seems it is the Teblor who are running out of time. Another long-feared migration is about to begin and this time it won't just be three warriors. No, this time tens of thousands are poised to pour into the lands to the south. And in their way, a single company of Malazan marines . . .

Steven Erikson is a New York Times bestselling author renown for writing The Malazan Book of the Fallen, a ten-volume series that has sold millions of copies worldwide and is recognized as number two of the top 10 fantasy books by Fantasy Book Review and one of 30 best fantasy series of all time by Paste Magazine. He is a trained archaeologist and anthropologist who has published over twenty books, most of which explore notions of privilege, power hierarchies, and the rise and fall of civilizations, or take the piss out of the same. Erikson has been nominated for the Locus Award four times and the World Fantasy Award twice. His next novel Rejoice, a Knife to the Heart, is an SF First Contact story, due out in October, 2018. He lives in Victoria, B.C. with his lovely wife Clare.

Praise for Steven Erikson and The God Is Not Willing

Erikson burnishes his reputation as a superior epic fantasy world-builder. . . Erikson's outstanding descriptive skills . . . enhance a complicated narrative that sweats the details. This is a treat both for Erikson's returning readers and lovers of George R.R. Martin-style epic fantasy who have yet to discover his work." - Publishers Weekly Starred Review

"A master of lost and forgotten epochs, a weaver of ancient epics." - Salon.com

"This masterwork of the imagination may be the high watermark of epic fantasy." - Glenn Cook, bestselling author of The Black Company

"Awe-inspiring. Prepare to fall in love with epic fantasy all over again." - Anna Smith Spark, author of The Court of Broken Knives

"The kind of epic narrative that will have you scrambling for more." - Stephen R. Donaldson, author of The Chronicles of Thomas Covenant

"Erikson has no peer when it comes to action and imagination, and joins the ranks of Tolkien and Donaldson in his mythic vision and perhaps then goes one better." - SF Site

Other titles by Steven Erikson

The Second Book in the Kharkanas Trilogy

Rejoice, a Knife to the Heart

Willful Child: The Search for Spark