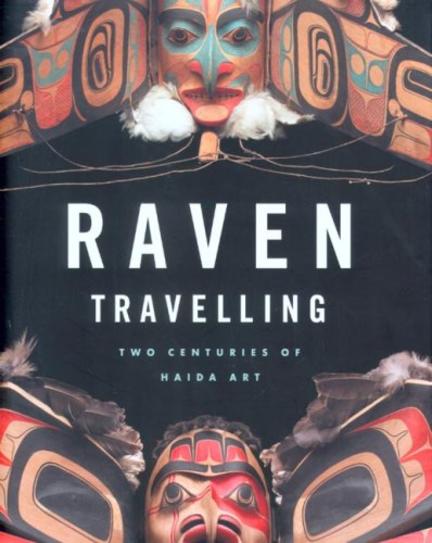 A fresh revelation of Haida art and culture, full of contemporary as well as traditional work-over 5,000 copies sold.

Haida art is renowned worldwide but is often discussed with little reference to its creators and their homeland, Haida Gwaii or the Queen Charlotte Islands. This book presents key themes: the influence of the Master-Carvers; the monumental achievement of Bill Reid; the hybridity in contemporary Haida art; the defining myths of origin; social templates of ownership and privilege; the relationship of the people to their land; the Haida and colonialism. From traditional songs and genealogies to the innovative aesthetics of contemporary Haida work in many media, Raven Travelling situates Haida art where it has always belonged, inseparable from its people and at the very apex of the great accomplishments of human creativity.

Haida actress , Marianne Jones (a co-director of the popular TV series Ravens and Eagles) addresses the significance of the land in Haida art and culture.

Contemporary artists Robert Davidson, Don Yeomans and Michael Nicoll Yahgulanaas talk about pushing the limits of tradition as they adapt to global influences.

This book was published in partnership with the Vancouver ARt Gallery.

Daina Augaitis is a Canadian curator of contemporary art. She has held curatorial positions at the Vancouver Art Gallery; Walter Phillips Gallery, Banff; Western Front, Vancouver; Convertible Showroom, Vancouver; and Franklin Furnace, New York; and was formerly director of Visual Arts at The Banff Centre (1992-1994), where she organized residencies for artists and curators. Augaitis has edited anthologies and written numerous catalogue essays and articles, frequently addressing cultural and social issues.

Marianne Jones was born and raised in Thunder Bay, Ontario, where she lives with her husband Reg. Her work has appeared in Room, Wascana Review, Canadian Living and Reader's Digest, and won awards from the Canadian Authors Association, Writer's Digest, and others. Her as-told-to memoir, The Girl Who Wouldn't Die, won the 2015 Word Alive Press publishing contest. Much of her writing celebrates the unique beauty of Northwestern Ontario. She and her husband love music, live theatre and ballroom dancing. Together they have two daughters and two granddaughters. Marianne is currently at work on a mystery set in Thunder Bay.

Peter Macnair is former Curator of Anthropology at the Royal British Columbia Museum, Victoria, a post he held for more than thirty years. During this time he was co-author of The Legacy: Tradition and Innovation in Northwest Coast Indian Art and was curatorial consultant to "Chiefly Feast: The Enduring Kwakiutl Potlatch," a major traveling exhibition organized by the American Museum of Natural History. He is widely recognized for his knowledge of the art and history of the First Nations of the Pacific Northwest Coast.

This valuable publication coincided with an exhibition of the same name celebrating the Vancouver Art Gallery’s 75 th anniversary. It celebrates Haida art and artists – their sculptures, masks and baskets – with high quality photographic reproductions. The stories by Haida artists accompanying the artwork make this book truly unique. Creation stories, the history and function of Haida art and the repatriation of Haida ancestors are discussed. Authors include such well-known artists as Bill Reid and Robert Davidson.

Other titles by Daina Augaitis

Modern in the Making

MashUp: The Birth of Modern Culture

Other titles by Marianne Jones