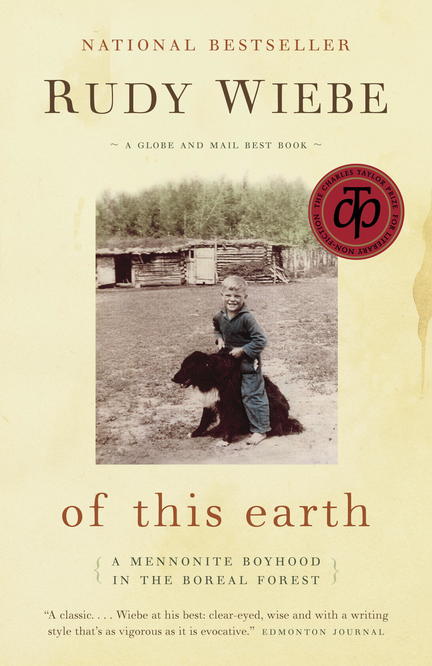 Rudy Wiebe has written award-winning fiction for decades. He is recognized as one of Canada's finest literary treasures. Twice he has received Canada's most prestigious prize for fiction writing: The Governor-General's Award (equivalent to the Pulitzer Prize for fiction).

Now comes new recognition for Wiebe's nonfiction writing. His recently released childhood memoir, Of This Earth: A Mennonite Boyhood in the Boreal Forest, has won the Charles Taylor Prize for Literary Nonfiction (considered to be the country's most prestigious literary nonfiction prize).

The book holds Rudy's memoirs of growing up through age 12. His immigrant family cut a farm out of stony bushland in remote Saskatchewan. They hand-dug their well, climbed a ladder to their beds under the rafters, farmed with horses, and traveled by sleigh on the frontier.

Stories and singing and food from their native Ukraine and Poland held them and filled their bodies and souls.

Of This Earth is written with "spare and eloquent prose," say the jurors who chose the book for the Charles Taylor Prize.

Wiebe "conveys the riches of a hardscrabble inheritance; a love of words, reading and music, a sustaining yet unsentimental faith, and a bond with the natural world, all of which have provided a compass for his writing life."

One of the Taylor-Prize jurors reflected, "Rudy's book haunts you; it stays with you."

Where the Truth Lies