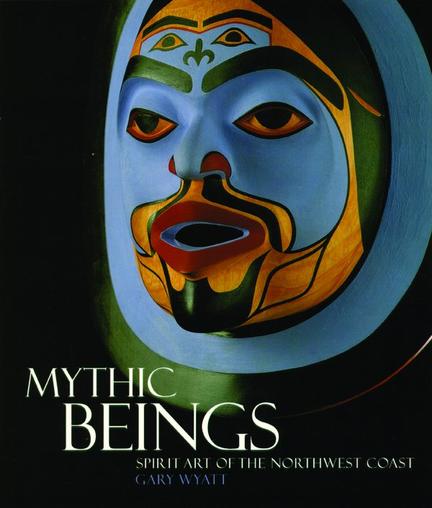 The power of their art comes from its deep roots in an ancient culture that is rich in ceremonial and aesthetic traditions. The mythic beings depicted in these 75 works belong to the undersea, sky, mortal and spirit worlds: Raven, Thunderbird, Killer whale, the chief of the undersea, Moon, Volcano Woman and many more. Their adventures are told in oral histories passed down through generations. Here, these myths and mythic beings take shape as model totem poles, jewellery, carved and painted boxes, painted drums, rattles, ceremonial robes and masksóas well as sculpture in argillite, wood and glass. Some of the beings are represented by works by different artists or in different media, providing a glimpse of the richness and resonance of an art strongly connected to myth and spirituality. The challenge facing artists today is to interpret myths in ways that combine innovation and tradition. That Northwest Coast art continues to flourish both in its original cultural context and in the international art world is a measure of their success.

Gary Wyatt's introduction outlines the integral place of art in the ceremonial and spiritual life of Northwest Coast societies. He provides insights into the cosmology of the Northwest Coast, as well as retelling some of the major myths. In addition, each work is accompanied by the artist's own words describing its meaning, cultural significance and creation.

Gary Wyatt was educated at the Alberta College of Art and the University of British Columbia, where he also interned in museum studies and Northwest Coast art at the Museum of Anthropology. He was curator of the Northwest Coast collection at the Inuit Gallery from 1987 to 1995. Since 1995 he has been a curator at the new Spirit Wrestler Gallery in Vancouver. His first book, Spirit Faces: Contemporary Masks of the Northwest Coast, was published to critical acclaim and has sold over 25,000 copies in Canada, the United States and Europe.

Other titles by Gary Wyatt