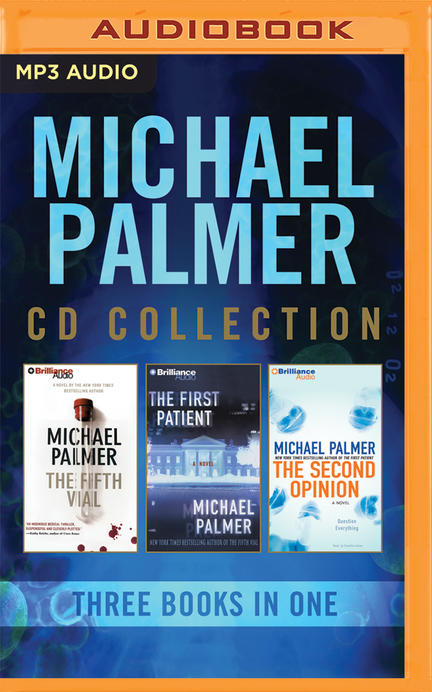 The Fifth Vial: From Boston, a disgraced medical student travels to South America to deliver a research paper that could save her career and becomes a victim of an unspeakable crime.… Thousands of miles away, a brilliant, reclusive scientist is on the verge of perfecting a serum that could save millions of lives, and bring others inestimable wealth.… In Chicago, a disillusioned private detective, on the way to his third career, is hired to determine the identity of a John Doe, killed on a Florida highway, with mysterious marks on his body. Three lives linked forever by a single vial of blood—the fifth vial.

The First Patient: It is not until he is ensconced in the White House medical office that Gabe Singleton realizes there is strong evidence that the President is going insane. Facing a crisis of conscience—as President Stoddard’s physician, he has the power to invoke the Twenty-fifth Amendment to transfer presidential power to the Vice President—Gabe uncovers increasing evidence that his friend’s condition may not be due to natural causes.

The President’s life is at stake. A small-town doctor suddenly finds himself in the most powerful position on earth, and the safety of the world is in jeopardy.

The Second Opinion: Michael Palmer has created a cat-and-mouse game where one woman must confront a conspiracy of doctors to uncover an evil practice that touches every single person who ever has a medical test. With unforgettable characters and twists and betrayals that come from the most unlikely places, The Second Opinion will keep you guessing...and looking over your shoulder.

Other titles by J. Charles

Other titles by Franette Liebow