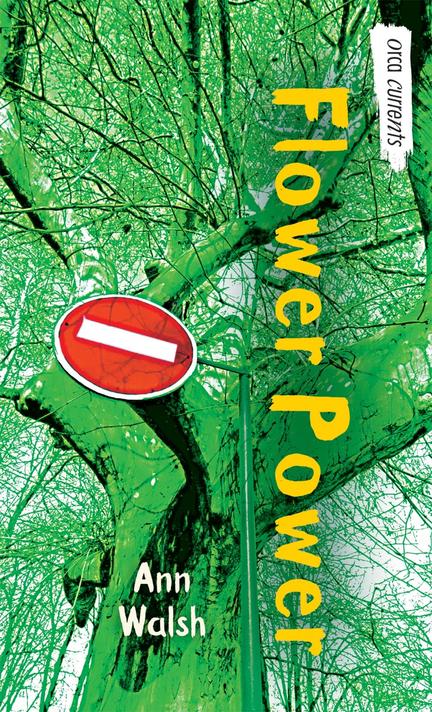 Callie's mother has chained herself to the neighbor's tree and is living inside the treehouse. She refuses to come down until the neighbor, Mr. Wilson, agrees to leave the tree standing. Soon reporters arrive to interview Callie about her mother's protest. Callie doesnít want to talk to anyone. More chaos ensues when Callie's grandmother invites the "singing grannies" to help save the tree, the neighbor's biker friends come to her aid, and Callie's friends show up to try to get themselves on TV. Callie needs to figure out how to get her mother to come down from the tree so that her life can return to normal.

Ann is a long time Williams Lake, British Columbia resident who has taught both in elementary schools and at the college level. She is the author of seven novels for young readers, most of them set in Barkerville during the gold rush. Her first book, Your Time, My Time was published twenty-two years ago and has been in print continuously since then. As well, Ann is the author of a book of poetry and the editor of three collections of short stories for young people. She also writes for adult readers, and her work has appeared in magazines and anthologies around the world. In Canada her work has been published in Canadian Living, Arts Forum (Ontario) and elsewhere, as well as being heard on CBC radio. Ann serves on the executive of several professional writers' organizations, both in British Columbia and Canada-wide.

Her books have been nominated for major Canadian book prizes and all of them have been selected as "Our Choice" titles by the Canadian Children's Book Centre. Ann is a popular workshop presenter at conferences for writers (Grades 5 to Adult) and is in demand as a speaker, both in schools and at literary festivals. She loves traveling, and is willing to gear her presentations to the needs and requests of a particular school or classroom. Her sessions are fast paced and entertaining, as well as informative. As one teacher commented after Ann had visited her school "She made history come alive."

More about Ann can be found at the CWILL BC website, http://www.cwill.bc.ca/public/search/member_detail/62.

Why did everyone keep asking me how I felt? How did they expect me to feel? I felt rotten. I felt worried. I felt scared.

Scared about her falling and hurting herself.

And very very scared about what my friends would say when they found out what was going on.

How did I feel? What a dumb question.

"By dealing with issues such as activism, environmentalism and conflict resolution, Ann Walsh has crafted a thoughtful novel that will appeal to readers both younger and older than its intended age group."

"This humourous and inventive story is full of wit."

"The storyline is fast-paced and interesting while being written at a readability level which will appeal to those who struggle with reading."

"An amusing and engaging novel...Recommended."

Other titles by Ann Walsh

By the Skin of His Teeth / Moses, Me, and Murder / The Doctor's Apprentice

Moses, Me, and Murder

Your Time, My Time Teachers' Guide

The Ghost of Soda Creek

Your Time, My Time