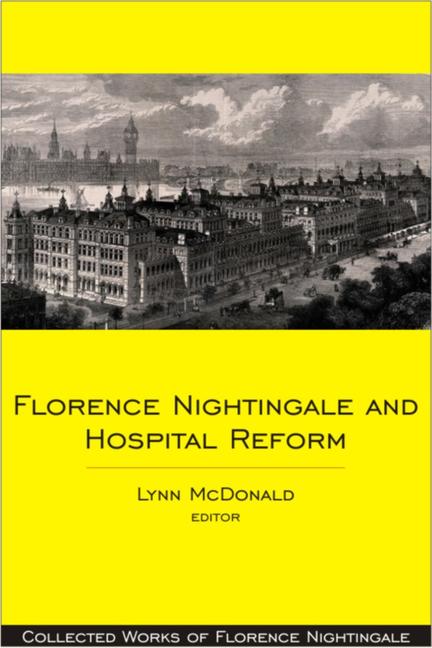 Florence Nightingale began working on hospital reform even before she founded her famous school of nursing; hospitals were dangerous places for nurses as well as patients, and they urgently needed fundamental reform. She continued to work on safer hospital design, location, and materials to the end of her working life, advising on plans for children’s, general, military, and convalescent hospitals and workhouse infirmaries.

Florence Nightingale and Hospital Reform, the final volume in the Collected Works of Florence Nightingale, includes her influential Notes on Hospitals, with its much-quoted musing on the need of a Hippocratic oath for hospitals—namely, that first they should do the sick no harm. Nightingale’s anonymous articles on hospital design are printed here also, as are later encyclopedia entries on hospitals.

Correspondence with architects, engineers, doctors, philanthropists, local notables, and politicians is included. The results of these letters, some with detailed critiques of hospital plans, can be seen initially in the great British examples of the new “pavilion” design—at St. Thomas’, London (a civil hospital), at the Herbert Hospital (military), and later at many hospitals throughout the UK and internationally. Nightingale’s insistence on keeping good statistics to track rates of mortality and hospital stays, and on using them to compare hospitals, can be seen as good advice for today, given the new versions of “hospital-acquired infections” she combatted.

Lynn McDonald is a professor of sociology at the University of Guelph, Ontario. She is a former president of the National Action Committee on the Status of Women, Canada’s largest women’s organization. As a Member of Parliament (the first “Ms” in the House of Commons), her Non-smokers Health Act made Parliamentary history as a private member’s bill, and made Canada a world leader in the “tobacco wars.” She is the author of The Early Origins of the Social Sciences (1993), and The Women Founders of the Social Sciences (1994) and editor of Women Theorists on Society and Politics (WLU Press, 1998), all of which have significant sections on Florence Nightingale.

''The Collected Works will allow us to see for the first time the full complexity of this extraordinary and multifacted woman. It will be a tool of enormous value not only to Nightgale scholars and biographers, but also to historians of a wide variety of aspects of Victorian society: war, the army, public health nursing, religion, India, women's issues and so on.''

''The Collected Works of Florence Nightingale is an extremely ambitious project that is a great service to scholarship. Every general academic library should own the complete set. It pulls together material that has been hitherto diffused across more than 150 collections, some of them private ones, in places ranging from Germany to India and Japan, as well as numerous English-speaking countries.''

''[I]t is clear that this is an academic project of the highest importance and integrity. It will have an impact on the work of scholars far beyond the immediate field of health history. Nightingale's interests were wide-ranging and her correspondence included some of the leading thinkers of her day....The editing of these volumes is exemplary. Every reference has been followed up, including the identification of minor dramatis personae. Important personalities are accorded short biographies. On every page there are biblical allusions, which are faithfully identified. Each thematic section has an introductory essay and these are amplified by a full outline of Nightingale's life and thought in volume 1. This project makes a major contribution to scholarship which will be of permanent value.''

''The Nightingale project ranks with both the Gladstone diaries and the Disraeli letters as a major undertaking in the field of Victorian-era scholarship, and therefore is of surpassing value to historians of the period, as well as to general readers.''

''This is not only an excellent volume but also a crowning edition for the sixteen-volume series. The volume on hospitals brings together many of Nightingale's interests and clearly demonstrates her enormous impact on all aspects of hospital management.... The editor is to be congratulated on what can only be described as a magisterial piece of scholarship.''

Other titles by Lynn McDonald

Florence Nightingale on Wars and the War Office

The Making of the Myth

Women Founders of the Social Sciences

Florence Nightingale: An Introduction to Her Life and Family