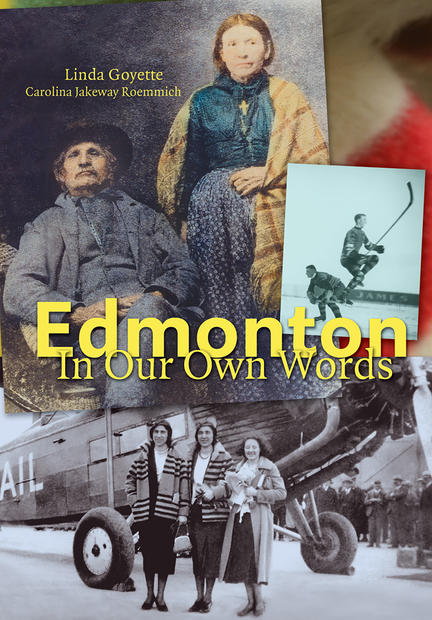 Linda Goyette and Carolina Roemmich have tapped Edmonton's collective memoir, through the written record, the spoken stories and the vast silences. All of the people who ever lived at this bend in the North Saskatchewan took part in creating the city we know as Edmonton. Through traditional Indigenous stories about the earliest travellers along the bend in the river, diaries, archival records and letters of 19th century inhabitants and the recollections of living residents who talk about the emerging city, Edmonton's history is told using the words and stories of the people who have called this city home. Citizens with diverse viewpoints speak for themselves, describing important events in Edmonton's social, political and economic development. The official publication of the City of Edmonton's Centennial, Edmonton In Our Own Words includes many never seen before photographs from private collections, historic maps and a timeline of Edmonton's history. Imagine a conversation between Edmonton's past inhabitants and its living citizens. What would we tell the rest of the world about our place on the map? What stories would we tell with tears in our eyes, or laughter, or pride? In Edmonton In Our Own Words, experience the personal stories of eyewitnesses and descendants explaining, arguing, crying, scolding, laughing and interrupting one another in a city's evolving conversation with itself as Edmonton celebrates its past and future.

Samantha Warwick was born in Montreal and raised in Sutton, Quebec and Vancouver. She received her MFA in creative writing from the University of British Columbia in 2003. Her work has been broadcast on CBC Radio and has appeared in various literary magazines including Geist, Event, Room and echolocation. Samantha Warwick spent seven years coaching competitive swimming between 1997 and 2004, and has participated in long distance open-water swim races in British Columbia, California and New York. She now lives and works in Calgary where she is at work on her second novel.

Carolina Jakeway Roemmich is a researcher based in Edmonton. She is a graduate of the University of Alberta.

Keith Turnbull served as the artistic director of Theatre Arts programs at the Banff Centre for the Arts from 1993-1999 and was also the codirector of the Banff playRites Colony and director of the Contemporary Opera and Song Training Program from 1997-2000. His career as a director, producer, designer and dramaturge is highlighted by a commitment to contemporary and new work in both theatre and opera.

In addition, Turnbull has a particular interest in the pedagogy, performance practice and interpretation of the works of Shakespeare and of other language-based texts. He has directed over seventy plays at various theatres throughout the world.

Turnbull also founded a First Nations theatre company from which emerged many of Canada’s most noted Native performers. He was the founding co-artistic director of the Toronto Theatre Festival, the president of the Toronto Theatre Alliance as well as a board member of the Canadian Actors’ Equity Association. He has taught at the University of Manitoba, the National Theatre School, the University of Calgary and the Banff Centre for the Arts.

"A bestseller when it was released in celebration of the city's centennial, Linda Goyette's daring exploration of the city's colourful past is now available in trade-size paperback. A remarkable piece of historical research and writing, the book recently earned Goyette the Grant MacEwan Award, the province's most lucrative and prestigious literary prize. As in all good histories, Goyette and her research assistant Carolina Jakeway Roemmich take their readers back in time through the words and stories of people who have come before us. More importantly, she gives voice to those who have been unfortunately overlooked in other, more conventional popular histories." Marc Horton, Edmonton Journal

"Linda Goyette's writing has always suggested that for those of us living in this geography called Canada, it is crucial to make ourselves visible to each other. Goyette has been busy collecting stories from a wide variety of people in Edmonton and every small corner of Alberta. They have come together in three narrative histories that give the stage to voices often excluded from our collective sense of identity, [including] Edmonton In Our Own Words." Thea Bowering, SEE Magazine, October 13-19, 2005

"Linda Goyette's balanced and smart Edmonton In Our Own Words, which she wrote with Carolina Jakeway Roemmich, put the history of Our Town in its proper context. It's an unblinking look at our shared past, and the portrait presented by Goyette and Roemmich is a warts-and-all affair, giving voice to many people whose histories have too often been overlooked..Goyette is an engaging writer and a grand storyteller." Marc Horton, The Edmonton Journal

"[Edmonton In Our Own Words] is a sprawling first-person telling of Edmonton's relatively brief history.But, more than just compiling and presenting a huge amount of popular history, [Edmonton In Our Own Words] also reflect[s] both the University of Alberta's dedication to the local community and a shift in the way historical narratives are collected and communicated." Gilbert A. Bouchard, Folio Magazine

"...fall history blockbuster. More than two years in the making, Edmonton In Our Own Words is a 500-page contemporary history written by journalist Linda Goyette with the help of Carolina Jakeway Roemmich. It chronicles a century of native, cultural, industrial, and social history, with generous space devoted to letters and anecdotes from Edmontonians present and deceased." Lisa Gregoire, Quill & Quire Magazine, November 2004

"Goyette came away with the $25,000 [Grant MacEwan Authors' Award] award, for Edmonton In Our Own Words, a massive compilation of Edmonton stories from hundreds of contributors." Allison Kydd, SEE Magazine, May 12-18/05

"[Edmonton In Our Own Words], written in celebration of Edmonton's centennial, tell[s] the story of the city's past as told by the men, women and children who helped shape it.[and] bring[s] the past to life." Corinne Lutter, The Edmonton Examiner

"Applause greets the announcement that Goyette has won the $25,000 Grant MacEwan Writing Award-which she shared with researcher Carolina Jakeway Roemmich-for the book which draws on the voices of countless Albertans to create a multi-layered account of the province's capital over many centuries." Legacy Magazine, Fall 2005

"Official histories are frequently consensus histories. It takes an act of some courage to challenge that expectation. Edmonton In Our Own Words provides a look at history that includes the words of those who may not yet be a part of such a consensus, opening the possibilities of new debates and even a new consensus for a new century." Ken Tingley, The Edmonton Journal

"The best thing about Edmonton In Our Own Words is the way it's written, as if the stories are first-hand accounts.Goyette makes these Edmonton stories and even Edmontonians' part in international events such as the world wars, both personal and interesting." Susan Jones, The St. Albert Gazette

"Through traditional aboriginal stories about the earliest travellers along the North Saskatchewan River; oral history, diaries, letters, and archival records of nineteenth century inhabitants; and the recollections of living citizens, Edmonton's history is told in the words of the people who have called this city home." Prairie Books NOW, fall/winter 2004

"Linda Goyette, former Journal columnist and now freshly minted author, wants Edmontonians to be as familiar with the names of Papaschase and Callihoo, Jimmy Jock Bird and Lapotac as they might be with Secord and McDougall, Rowand and Griesbach.So just as the book celebrates much of what makes this city special, it also presents a courageous and fresh look at some of the shiny spots in our history." Marc Horton, The Edmonton Journal

"Representatives of Edmonton's writing and publishing community crowded into the mini-gallery in the foyer of the Edmonton Public Library's Stanley Milner Branch last week to hear the shortlist for the 2005 Alberta Book Awards....Among the Edmonton contenders are Linda Goyette and co-author Carolina Jakeway Roemmich for Edmonton In Our Own Words...This sizable compilation of stories about Edmonton by Edmontonians is on the shortlist for three awards, including the Wilfred Eggleston Award for Non-Fiction and the Grant MacEwan Author's Award." Allison Kydd, SEE Magazine, April 14-20/05

"Edmonton in Our Own Words is a very rare bird: an accessible book which, if you look carefully, is also extremely sophisticated in its structure and the way it crosscuts voices and meanings. Goyette has given us a wonderfully complete yet teasingly incomplete history of Edmonton that reveals both the fabric of memory and wellspring of civic mythologies." Christopher Wiebe, VUE Weekly, March 10-16, 2005 (Full article at http://www.vueweekly.com/articles/default.aspx?i=1750)

"It is the most comprehensive and inclusive history ever written for Edmonton." New Trail Magazine

"Edmonton In Our Own Words is everything a centennial history of the city should be: richly detailed, frankly informative, sweeping in scope and ambitious. But it is much more. It is a thoroughly absorbing work, the kind one opens for a quick look, emerging hours later with a sense of having time-travelled." Canadian Geographic, January/February 2005

Other titles by Linda Goyette

The Story That Brought Me Here

To Alberta From Everywhere

Women Speak Out About Violence and Abuse

Other titles by Keith Turnbull