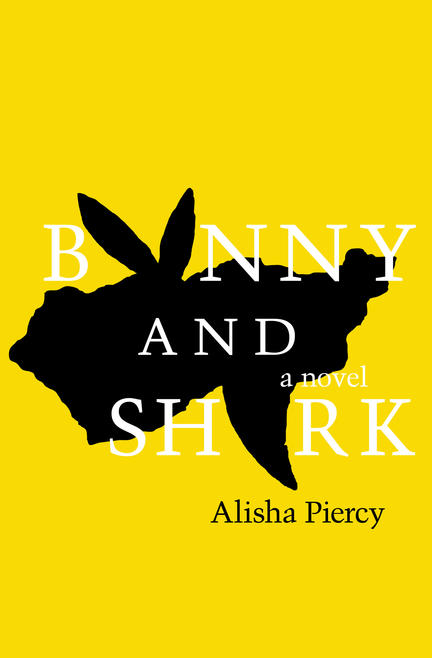 From award-winning author Alisha Piercy comes Bunny and Shark, a middle-aged coming-of-age story-cum-shark-adventure that reveals and celebrates women's power in the trenches. Plunging into the first thirteen days after the 'bastard' pushes his ex-Playboy wife 'Bunny' over a cliff in the Caribbean, Bunny and Shark is a fable about island survival, and the perils and potentials of being exiled from one's identity.

Literally lost at sea, Bunny is fueled by the miracle of having been saved from sharks by a band of dolphins. And her continued survival depends on her ability to become a spiritual extension of the landscape: she is the mood of the ocean at night as she swims blindly in it, and the protective coolness of the jungle by day as she recovers from a loss of limb; the close-walled refuge of the sailboats anchored in the harbour, and the sparkling deck of an opulent superyacht when, transformed, she makes a triumphant return to her former world.

Introducing one of the great heroines of contemporary fiction, Bunny and Shark takes readers on a voyage intense with abandon and illumination, in a story that invokes more than a little bit of magic in the telling.

Alisha Piercy is a Montréal-based writer, artist, and painting conservator. Studies in literature, art conservation and print media influence her creative practice, which ranges from drawing installations to sculptural bookworks to the writing of novellas. Her work has been exhibited in various galleries in Eastern Canada, with international projects in Iceland and Mexico. Her chapbook You have hair like flags won the bpNichol Chapbook Poetry Award in 2010. Her artwork is represented by Galerie Youn in Montreal. Find Piercy at www.alishapiercy.com or connect with her on Facebook https://www.facebook.com/alisha.piercy/.

Praise for Bunny and Shark: "This violent, sensual, heartbreaking story of a worldly-powerful woman's experience of being cast out, carries us on the unlikely journey of what it is to become otherworldly-powerful... Teeming with original ideas and dreamy prose, Bunny and Shark is a visceral romp through what it might be like to attain the amphibious, to be alive at the very same time inside the everyday and the numinous."
- Caia Hagel, international art critic, author of Acts of Kindness and Excellence in Times Tables and co-author of the forthcoming +Girl Positive+

"It is easy for the reader to lose him or herself to the adventure--it really is the kind of paperback you'd want tucked into your bag for a vacation.
&ndash Maisonneuve

Bunny and the Shark

I liked this book, and I liked how the main character Bunny, is trying to get her shit together as a woman on her own. I liked her struggle and her viewpoint of a new life without a man. I just found it never really came together for me, I was never that into the character of Bunny. I wanted to root for her more, but I did not particularly like her.
An interesting concept, but did not connect.

Other titles by Alisha Piercy