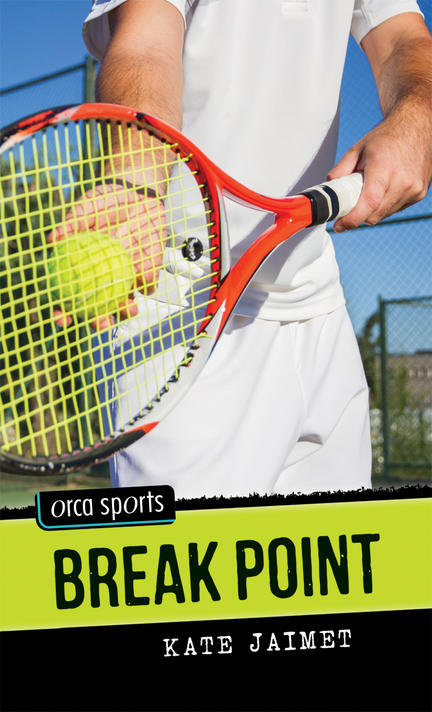 It's the summer of Connor Trent's sixteenth birthday, and the stakes for him have never been so high. Connor's summer job at the Bytowne Tennis Club allows him to train at a historic facility. It also throws him into confrontation with his rich-kid rival, Rex Hunter, whom he will battle for a berth in the National Junior Tournament. After a series of fundraisers is sabotaged, Connor suspects that someone wants to bankrupt the club and take over its valuable riverfront property. A fabled trophy, rumored to contain hidden cash, might solve all of Connor's problems—if he can win it.

Kate Jaimet is an author and journalist who recently began a freelance career after many years as a daily newspaper reporter for the Ottawa Citizen. Her first book in the Orca Sports series, Slam Dunk, was selected by the Junior Library Guild and the Canadian Children's Book Centre as a Best Book for Kids & Teens. Kate learned to rock climb in Germany, and now has a bouldering wall in her basement in Ottawa, Ontario. More information is available at http://www.katejaimet.com.

"[Jaimet's] first-person descriptions of the hero playing a tennis match are well-researched; the ring of authenticity and the concurrent sub-plots work well with the story's main focus."

"Jaimet has written a fast-paced story from a first-person narrative. She easily explains the rules of the game whilst maintaining the excitement of a match and conveying the adrenaline rush a player feels during competition. Pre-teen and teen boys will find Jaimet's adrenaline-soaked descriptions of the matches to be a fast and exhilarating read. However, what is most commendable about the book is the character Jaimet has created in Connor. She bypasses a flat, stock jock-character for a more mature young man who contemplates morality and how it would translate in action...An engaging story filled with vivid descriptions, insightful characters and a fast-paced plot line that will appeal to pre-teen and teen boys."

"Filled with fast-paced action...The chapters that describe different tennis matches are particularly well written, with the reader feeling as if they are standing right next to the court. If you love tennis (like me) the scenes outlining the back-and-forth volleys and rushes towards the net are a joy to read. Even if you are not a huge tennis fan, or for that matter a sports enthusiast, these scenes are still a lot of fun."

Other titles by Kate Jaimet

A Death on a Deadline Mystery