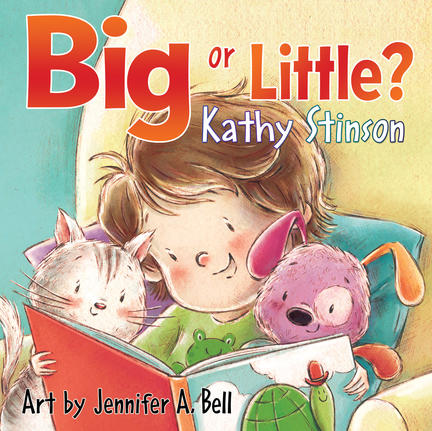 A big favorite about being little, now available as a board book.

It can be tough sometimes, trying to figure out if you’re a little kid or a big one. Putting your shoes on all by yourself means you’re big. But if you can’t get your shirt over your head, that must mean you’re still little!

The child in this classic story by Kathy Stinson goes through the day wondering which activities mean you’re big, and which mean you’re little. Counting to 10? Definitely big! But can’t reach the cookies … certainly means little. Being big sure would be great … but being little is okay, too.

Still in demand after 25 years, Big or Little? is back with a shorter text adapted for toddlers, and wonderfully imaginative new illustrations. Full of the everyday struggles and triumphs of growing up, this favorite story will resonate with pre-schoolers everywhere.

Jennifer A. Bell has illustrated almost a dozen children's books, including Little Dog, Lost, When Dad Says "I Love You", and the Stella Batts series. Her work has also appeared in magazines and on greeting cards. She lives with her husband and son in Toronto, Ontario. Visit her online at www.jenniferabell.com.

“This is a great book for the “not quite there yet” crowd.”

“A definite must-buy for the toddler crowd.”

Other titles by Jennifer A. Bell

The Best Gift for Bear

illustrated by Jennifer A. Bell

by (author) Gary Urda
illustrated by Jennifer A. Bell

Nothing is Scary with Harry

by (author) Katie McElligott
illustrated by Jennifer A. Bell

Safe in a Storm

by (author) Stephen R. Swinburne
illustrated by Jennifer A. Bell