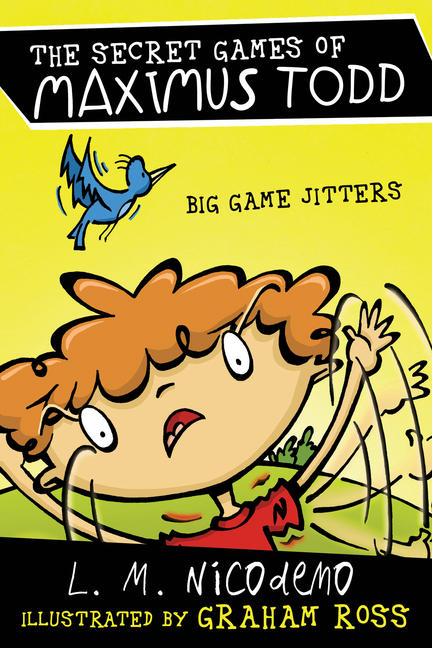 Meet Maximus Todd! He's the kid who can't sit still! It's the soccer championship and Max's team is playing the school bully's team. Of course, as soon as the match starts, Max gets a case of the Super Fidgets. If Max can't invent a secret game to calm them, it might cost his team the championship.

Max finds that while it's not always easy being a kid — especially if you're a bit different — there is often humour, kindness and love in the most unexpected places.

L. M. NICODEMO is an elementary school teacher who hopes that this series will mark the beginning of a long and joyful career in writing. She lives with her family in southwestern Ontario.

Look! Look what I've done!! The words of an eight year old as he holds up the drawing of a vibrant red fire engine. Oh Graham, that's wonderful.

Really? Oh this is good. You draw a picture and you get a reaction. I could get into this! And so it began. The seed was planted, further watered by bedtime rituals of propping pillows up against his bedroom wall getting into bed to get lost in a family member's reading of The Wind in the Willows.

An unintended lesson learned through those readings that our intrepid illustrator still calls upon in his illustration work is that the viewer will take different things from the illustration and he will add elements to the illustration that may go over some heads, but others will catch them and smile. There's always something to look at.

A graduate of the illustration program at Sheridan College in Ontario, Graham thought he would stick around the big smoke and in addition to his work as a designer at Canadian publisher McClelland & Stewart, he would also cultivate his Flock of Seagulls hair style and work on his dance floor moves. But alas soon follicles started to recede and shoulder pads deflated, so Graham moved back to his hometown of Ottawa, Ontario to contemplate his next career move.

It was in Ottawa that Graham began his freelance illustration and graphic design career. A career that has spawned illustrations for such publishers as Orca Book Publishers, Scholastic Canada, and Meadowside Books of the United Kingdom, as well as numerous Canadian government agencies and private design firms.

He lives in Merrickville, Ontario with a circus star family: his juggling wife, a helldriver daughter, a canine cannonball, and a fire breathing cat.

"The target audience will surely have no trouble relating to the storylines. The blend of fun graphics by Graham Ross, with varying sizes and designs of text in the quickly paced 96 pages, will be appealing to both beginning and reluctant readers.

The series is written by a teacher who clearly has insight into the mind of a child who feels the type of anxiety that Max does, presumably because she has encountered some throughout her career. While it may be rare to have a child as young as Max display the self-awareness and strength of will that he does, perhaps these books will serve as inspiration to children facing the same difficulties with their own Super Fidgets.

The four books were published concurrently for Formac's First Novels Series, in a format that should prove to be attractive to young readers."

"With a quirky main character and a relatable plot of childhood mishaps, Big Game Jitters is a pleasing read for young readers who are moving away from picture books and into short novels with chapters.

Featuring fun artwork and typography, this engaging early chapter book is sure to please. The simple yet effective black and white illustrations by Graham Ross help bring the characters and major plot points to life. Although some readers may yearn for a colour edition, the simplicity of the drawings allows the story to be the standout and helps emphasize that Maximus Todd could be any student, of any race or ethnic background, in any school.

Part of a larger series, Big Game Jitters offers not only a glimpse into being the kid who is a little bit different, but it also exemplifies authentic friendships offering compassion, kindness and understanding. Readers are certain to not only like Maximus Todd but also develop a genuine empathy for those who struggle in ways that aren't always apparent at first glance.

Other titles by L.M. Nicodemo

Hyper to the Max

Other titles by Graham Ross

A Case of the Clones; Invasion of the Insects; Out of Remote Control; Down the Brain Drain

Out of Remote Control

The Billy Sure Kid Entrepreneur Collection

Billy Sure Kid Entrepreneur 4 Books in 1!

Billy Sure Kid Entrepreneur and the Everything Locator