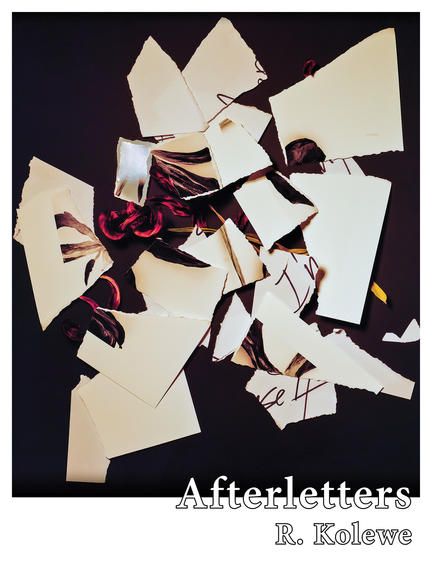 Lovers wrote letters. Letters crossed absence, longing, joy, passion, loss and heartbreak. Sometimes letters were answered. Sometimes not. And sometimes not for years, but then -

In 1948, in the exhausted aftermath of WWII, the poets Paul Celan and Ingeborg Bachmann met in Vienna. They began a difficult and intense but intermittent relationship which lasted until the early 1960s, broken off only when Bachmann could no longer deal with Celan's increasing mental instability. And yet, despite the break, the relationship continued to haunt both of them.

In Afterletters, R. Kolewe weaves together fragments of letters and other works of these two poets, to give us a stunning sequence of poems that explore the traces of loss and love, in language that breaks, recombines and scintillates, "star-crossed, star-covered, star-thrown."

R. Kolewe was born in Montreal. Educated in physics and engineering at the University of Toronto, he pursued a successful career in the software industry for many years, while living in a picturesque village in southwestern Ontario. Always a reader, he began to devote his time to writing not long after returning to Toronto in 2007. His work has appeared online at ditch, e-ratio, and The Puritan, and he has been associated with the online magazine of Canadian poetics, influencysalon.ca. He also takes photographs. Find Kolewe's work online at http://r.kolewe.net, http://hudsonpoems.net or follow him on Twitter @rkolewe.

Afterletters strikes a balance of Bachmann's more reverent tone and Celan's adamant questioning. Punctuation and form take on both Bachmannian and Celanian uses and shape.
- Michaela Mullin for Nomadic Press

This is a stunning first book.
- Douglas Barbour for Eclectic Ruckus

Other titles by R. Kolewe

A Net of Momentary Sapphire

The Absence of Zero